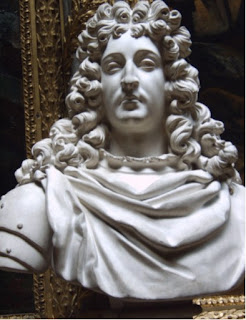 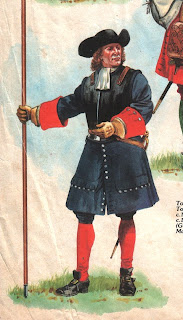 This is the time of the year for starting new projects. I know this from when I used to run reenactment societies the phone would start ringing as people decided they need a new hobby - something different than the year before. Also there is a whole industry based around getting people to subscribe to things like a medieval castle in brick by brick instalment or a collection of tanks of the world. Obviously only some people carry on but that doesn't prevent our good intentions being there does it?

I ought to start a reenactment regiment really. It's been years since I did and I probably would enjoy getting out and about. What to do though? Geography is important which would suggest something for the Monmouth Rebellion but I have kind of been there done that. Decisions. Always my problem as I don't stick at one thing for very long - so I suppose the next thing is to pick on something that has cropped up from time to time.
How about Regiment Zurlauben. (pic from R Marrion Military Modelling 1987). What do we know about them? Some debate as to whether they were Swiss, German or Walloon. Noticed there is a march of the Regiment Zurlauben on a Swiss band site. What else can be found by googling them? Johan Cronman was a captain in them and he was Swedish. Was Happy Jacques II colonel and the regiment from Alsace? Whatever they probably need to be done - I wonder if anyone already does them? Tell me what you know about this regiment folks...
Béat Jacques II de Zurlauben article in French
War and Game's Boyne section reads
[1] One Colonel Conrad von Zurlauben was the commander of the “Blue Regiment” composed of Swiss and German soldiers fighting in the French contingent in James II’s army at the Boyne in 1690. His regiment (two battalions) was the only French unit that saw much action in the battle, when it was used to cover the retreat of the main Jacobite force. Captain Stevens’ account says:
“Only the French can be said to have rallied for only they made head against the enemy and a most honourable retreat . . . Nor ought any of this glory to be attributed to the Count de Lauzun or La Hoguette, who at first left their men, but only to the valour and conduct of M. Zurlauben, Colonel of the Blue Regiment, who with unparalleled bravery headed and brought off his men.”(from the Journal of John Stevens, a captain in James’s Grand Prior’s regiment, quoted in Kinross, “The Boyne and Aughrim”, Windrush Press, 1997)
Anyway the first place to start is a shirt. I wonder if there is a specific military shirt for the military in Louis XIV's army?
Posted by Ralphus at 08:11

I know something. The first name of this Zurlauben was Beat Jakob. He was born in 1656. His family was a nobel family from Zug, Swiss.
At age 14 years he was officier in the Furstenberg regiment. Furstenberg chose in 1672 the side of France and so Furstenbergs regiment was sent to the Netherlands.
Here they were ordered to lay siege on Groningen in the North. On the 3rd of August 1672 he was captured by the city and was imprisoned there until January 1673. After this he went in French service. Pretty soon he got his own regiment, "Zurlauben regiment", and even made it to become a general.
Pretty impressive carreer. I can give sources if you want.

Additional to my previous post a short biographie: http://www.hls-dhs-dss.ch/textes/d/D49075.php