A fig for France

Over on the Rampjaar blog they have a fascinating song about the battle of St Denis in 1678 with all sorts of mentions of this battle fought with the French and the forces of the Prince of Orange. It says it is to the tune of 'A fig for France'...anyone know it?
Posted by Ralphus at 11:00 No comments:

There's always brilliant research and interesting pieces on the Rampjaar blog - in English and Dutch - on there at the moment is a list of all the regiments and ships engaged in the war against Holland - well worth a look.
Posted by Ralphus at 02:08 2 comments:

Labels: British troops of the Restoration, The Glory of the Sun 1665-80

If you want to see some of Brigade Games King Philip's War colonists then go over to Andrew's Ferrous Lands blog - they look very good indeed.
Posted by Ralphus at 02:14 1 comment:

Film about the reconstruction of a French vessel of the time of Louis XIV. 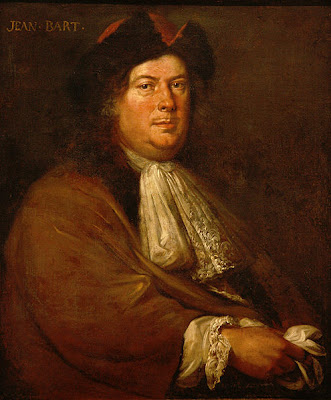 Today is the birthday of this famous privateer. A son of a fisherman he first served under De Ruyter and then later in the French service.
According to the wiki article he
achieved his greatest successes during the Nine Years' War (1688 - 1697).
In 1689, in the beginning of this war he was captured by the English , together with Claude de Forbin , and taken to Plymouth. But 3 days later, they succeeded in escaping to Brittany in a rowboat, together with 20 other sailors.
In 1691 he slipped through the blockade of Dunkirk, terrorizing the allied merchant fleet and burning a Scottish castle and four villages.
In 1694 he achieved his greatest success in the Action of 29 June 1694 , when he captured a huge convoy of Dutch grain ships, saving Paris from starvation.
In 1696 he struck another blow against the Dutch in the Battle of Dogger Bank (1696).
The Peace of Ryswick (1697) put a close to his active service. 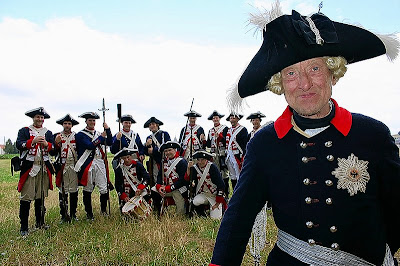 Of course Warburg is most famous for the 'going at it bald-headedness' of John Manners in England but here's a news article with this pre-publicity photo ( article is in German) on preparations for the reenactment there in 2010. Warburg at British battles 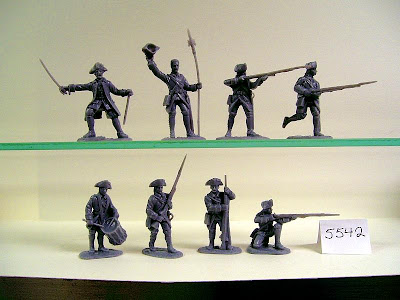 I am a bit of a 1/32 fan - probably as I cut my teeth on Britains and Herald and I still believe in the idea of garden and patio wargames - at least in theory anyway. But that's my excuse for letting you know about these French regulars, from Armies in Plastic - part of their new F&I range, but these are suitable for a European battlefield and obviously are ripe for conversion. It has to be said here that in this medium this period is rare - the American Revolution is popular.
Buying one of their multiple box purchases will give you some numbers of these to make units.
So who would you put them up against? First thought is the Prince August SYW Prussians. Available in the UK from Steve Weston.
Posted by Ralphus at 03:20 6 comments:

Apologies for it being SYW but I thought maybe it's worth posting this short film about the Minden 250th earlier this year - some good footage and information on this film and I think it is worth putting up. I am wishing I went now. Never mind there's two more big 250ths taking place in Germany next year and the next year after that - Warburg and Vellinghausen are going to be events that will be worth going to.

This is an interesting way to start a movie - well it gets my thumbs up...I guess it's influenced by Peter Watkins 1964 documentary. Instead of starting with a battle and so forth it features the bloody and tragic aftermath. Shame it doesn't look like what I imagine Culloden moor is like - ie a moor - but you can't have everything. Wiki
Watch scenes from the 1978 version here
Watch part 1 of the 1964 groundbreaking BBC documentary Culloden here.
See the Battlefield Britain episode here

Although it's got nothing to do with Louis XIV I thought I'd mention another new blog I've cooked up (as it is military history) called Warfare in the Age of Steam - dedicated to the mid-19th century, the Crimean war, Austro-Prussian war, ACW etc (European and American theatres) - not specifically a wargames blog - just the usual - paintings and period photos with my usual useless captions. See ya there.
Posted by Ralphus at 07:13 No comments: 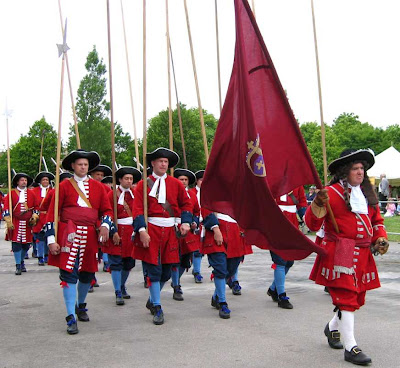 I've heard from a mate in the SK that they're going to be reenacting this battle next summer - presumably somewhere around the 6th/7th July. So if you're a fan of the period maybe that could be a good excuse to visit the region (Somerset) and get some farmhouse cider while you're down here. Some of us talked about organising a wargames event - maybe this could be a good time to do it - or maybe just meet up and have a few jars of cider and soak up the atmosphere. Photo of the First Foot Guards SK from the Friends of the Aldershot Military Museum site.
Posted by Ralphus at 07:02 No comments:

Thanks for the tip-off from anonymous. Here's what the website says: 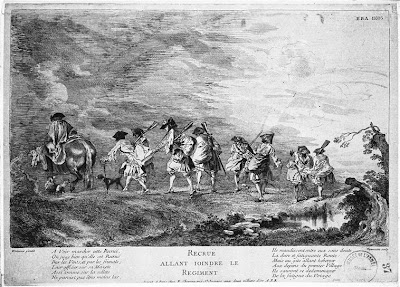 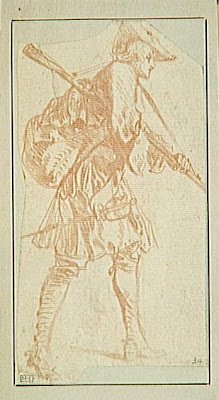 An excuse to post one of these great studies of French soldiers with their backpacks, laden and on the march. These packs were stowed before battle with a small guard.
I had this idea of a French reenactment group that would basically do the Watteau style bivouacs and nothing else - no battles - just route marches and bivouacs. But it obviously didn't really catch on but the lazy nature of Watteau's studies captures a certain peace time languidness.
Soldat armé d'un fusil et d'une épée
Watteau Jean-Antoine (1684-1721
Posted by Ralphus at 05:36 No comments:

For those of you with 28mm armies this release of Parliament and Royalist Horse might be up your street. It seems that hard plastic figures of this scale are really catching on.
Posted by Ralphus at 01:46 1 comment: 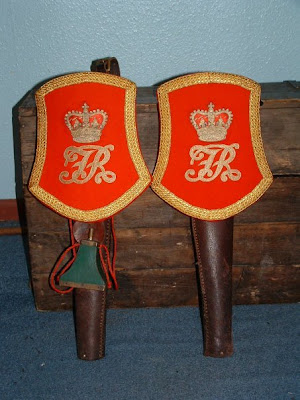 The cavalry arm in the Sealed Knot's 1685 project have some attractive new pistol housings with the JR cypher shown here for any modellers and wargamers of the Monmouth Rebellion. 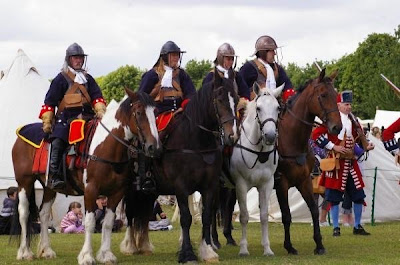