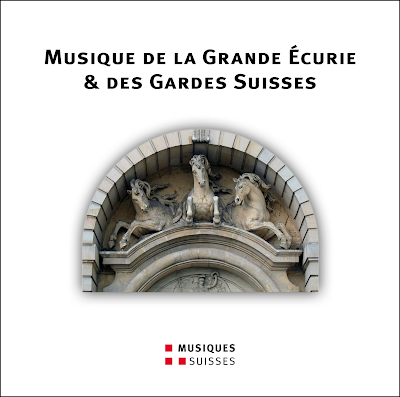 Had a nice email about a cd that you all might enjoy...

I've been reading your "Wars of Louis Quatorze"-Blog for quite some time and this may be something you might be interested in and like to add to the label "music":


More detailed contents of the CD can be found here (pdf):


The CD is resulting from a research project of the Schola Cantorum Basiliensis. Contributions are either in German or French or English. Lots of contemporary evidence, both written and pictorial. Check it out:

Looking for stuff on the mid 16th century has led me to find this well-made film of the Italian Wars battle being reenacted.

Here is the official page for the event if you are thinking about attending next year. Also lots of pictures and so on to give you a flavour of this European scale event. From the photos it looks like some UK people went - were you one of them? Tell us about it.
Posted by Ralphus at 08:49 No comments: 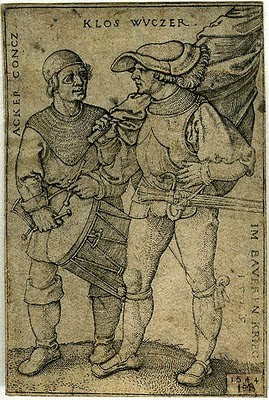 Had to go to Exeter the other day and it reminded me as we sped by Fenny Bridges that there was a Western Rebellion fought there in Devon that has been mainly lost in the mists of time but I am sure if you are a Cornishman you might have heard of it. It was mainly about the book of Common Prayer going into English instead of latin. Troops involved were quite a colourful mix - Landsknechts and Italian arquebusiers, foreign mercenaries on the Loyalist side - it would make an interesting display game...
Wiki on the rebellion
Siege of Exeter
Anglo-Cornish War of 1549
Battle of Sampford Courtenay Account of the Rebellion on Google books
More here
More here
Posted by Ralphus at 08:06 6 comments:

Glory of the Sun releases 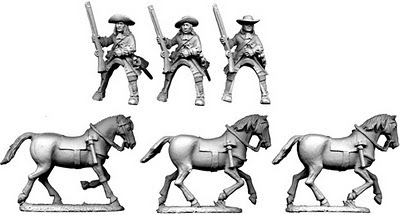 New cavalry and dragoons from Copplestone castings.
They look great - I fancy painting some up as Monmouth Rebels.
Posted by Ralphus at 12:33 3 comments: 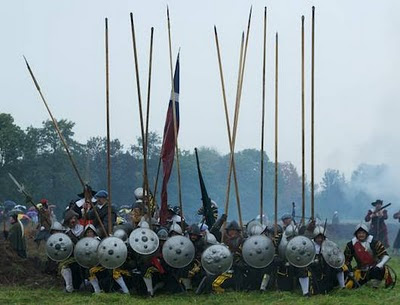 Phil Thomason's photos of battle reenactments and camp scenes are always excellent. I enjoy looking at his images - they capture the big and the little - a certain je ne sais quoi.
Here's some images of the annual event in Holland. It is part of the 80 Years War between Holland and Spain. Anyone up for an Irish tercio on the Spanish side?
Thomason's Facebook page
Posted by Ralphus at 09:54 1 comment:

Mars Swings For The Fence Again! 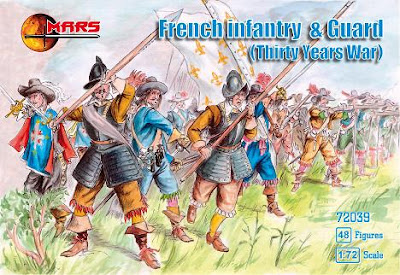 Well, PSR just announced that Mars has several new offerings, all four for the Thirty Years War. The first of these with any photo's on the Mars site looks like it could have been quite promising, and may find some use in your Army, but falls a bit short of the big base hit that it could have been.

French Infantry and Guard, #72039, pretty much depicts what the name suggests, except the "Guard" appear to be dismounted Mousquetaires du Roi (at least by the paint job shown on the box). Now, I'll grant you, French musketeers in cassock don't have to be the famous Guard units of the King and Cardinal, but they depict these in four poses, two functional musketeers (although with musket rests, which had pretty much fallen out of favor in France) and two that appear to be dueling with sword (probably useful to the skirmish gamer, but not of much value in a battle line). The other two musketeers shown are quite functional poses without rests and much more useful. 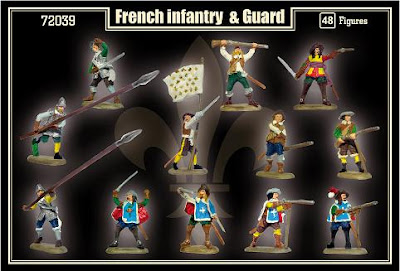 And, for once, a plastics maker has gotten the ratio of muskets to pikes correct for the period, although the pikemen shown are all in morion with back & breast and tassets, no lighter, rear-rank troops or helmet options. Then there are the obligatory "silly" poses one has come to expect from so many plastic sets; the first figure in the top row would appear to be a pikeman without his pike, sword drawn and trying to block a blow with his fist (or complaining of a headache perhaps?), and the second figure in the top row has his musket over his head by both hands (wading a stream perhaps?). The Command figures appear fairly useful, a decent Officer pose and standard bearer (although the flag is, as usual, too small). Both "true" pikeman figures are in nice aggressive poses and appear fairly well-modeled, if a bit over-armored.

And now the bad news (you knew it would be there, it is Mars after all), typical of their recent sets, there will be 4 each of the 12 offered poses. While there are enough pike and shot for a good 1:2 ratio 24-man unit, you will also have 8 "duelists", 4 officers and 4 standards, 4 of the bugger with his fist to his head, and even worse, 4 of the musketeer "wading the stream" to either chuck in the spares box or trade away (although the musketeer with his musket overhead might make a decent casualty figure with a bit of cutting). And where is the drummer, you might ask? Well, not in this set. I guess this will be a good opportunity for all of those extra drummers you got with either the Imperialists or the Swedes, eh?

Unfortunately, since this is Mars' own preview, the actual cast figures that you can buy will probably not look as good as the panted test shots on the box, at least not if Mars' recent history is anything to go by. So much potential, so little fulfillment, seems to be Mars' mantra doesn't it?

By the way, the other three releases are:

Of these, the box art for the Mounted Arquebusiers has some promise, with 6 poses and only two of each, for 12 total figures. The Swedish Heavy Cavalry might have some promise, or they might be bad copies of the old Revell figures yet again, no detail available yet.

PS - Please forgive the American Baseball references, but last night I got to see the Texas Rangers win the American League pennant and advance to the World Series of Baseball, and strike out the locally-despised Alex Rodriguez (a former Ranger who cost us millions) on the last pitch. High times in Texas!
Posted by Sir William the Aged at 06:04 4 comments:

This battle of the ECW was fought today, kicking off the war in fine style. Though what interests me most about this battle was the very frequently seen spectral refighting of this battle in the skies. This article from the Headless Horseman tells the tale very well - a BBC article tells the tale in more detail here which tells of the pamphlet published on the subject and the fact that Charles I sent observers to find out about it and they witnessed the phenomenon - seeing colleagues in the sky...

Edgehill - Warwickshire
The battle of Edgehill took place on 24th October 1642, and was the first major battle of the English Civil War. 3,000 Roundhead and Royalist soldiers lost their lives on this historic ground and their spirits still appear centuries after. On 23rd December 1642, shepherds tending their sheep at Edgehill witnessed a spectral re-enactment of the entire battle. At first the shepherds heard the sound of drums, then the noise of soldiers could be heard - giving out their last groans. Then appearing in the air “the same incorporeal soldiers that made those clamours” and phantom armies fought in the sky above the original battlefield. The phantom Parliamentarians and Cavalier soldiers re-appeared over several nights and were witnessed on Christmas Day by many people. In the 1940s Bill Priest, a local school master, claimed that ghostly phenomenon was a common occurrence in the area surrounding the field.
Posted by Ralphus at 05:34 No comments: 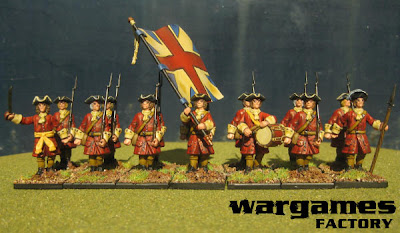 Well painted Front Rank by the looks - by the Grimsby wargamers. 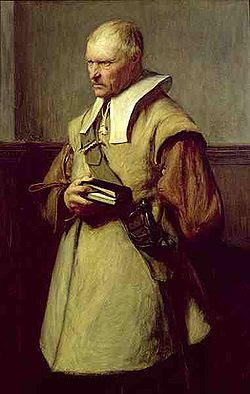 This Sunday up in London the Roundhead Association of the ECWS are marching to celebrate the anniversary of the Regicides who were hanged drawn and quartered in 1660. What that is all about is well explained on this blog here with times etc. Should be fun if you are in the capital.
Image A Roundhead by John Pettie
If you're wondering where the term Roundhead comes from here's what the wiki says

"Roundheads" appears to have been first used as a term of derision toward the end of 1641, when the debates in Parliament in the Bishops Exclusion Bill were causing riots at Westminster. Some, but by no means all, of the Puritans wore their hair closely cropped round the head, and there was an obvious contrast between them and the men of courtly fashion with their long ringlets. One authority said of the crowd which gathered there, "They had the hair of their heads very few of them longer than their ears, whereupon it came to pass that those who usually with their cries attended at Westminster were by a nickname called Roundheads." According to John Rushworth (Historical Collections) the word was first used on 27 December 1641 by a disbanded officer named David Hide, who during a riot is reported to have drawn his sword and said he would "cut the throat of those round-headed dogs that bawled against bishops".

However, Richard Baxter ascribes the origin of the term to a remark made by Queen Henrietta Maria at the trial of the Earl of Strafford earlier that year; referring to John Pym, she asked who the roundheaded man was.

The principal advisor to Charles II, the Earl of Clarendon (History of the Rebellion, volume IV. page 121) remarked on the matter, "and from those contestations the two terms of 'Roundhead' and 'Cavalier' grew to be received in discourse, ... they who were looked upon as servants to the king being then called 'Cavaliers,' and the other of the rabble contemned and despised under the name of 'Roundheads' ".

Ironically, after Anglican Archbishop Laud made a statute in 1636 instructing all clergy to wear short hair, many Puritans rebelled to show their contempt for his authority and began to grow their hair even longer [2] (as can be seen on their portraits), though they continued to be known as Roundheads. The longer hair was more common among the "Independent" and "high ranking" Puritans (which included Cromwell), especially toward the end of the Protectorate, while the "Presbyterian" (i.e. non-Independent) faction, and the military rank-and-file, continued to abhor long hair. By the end of this period some Independent Puritans were again derisively using the term Roundhead to refer to the Presbyterian Puritans.[3]

The memoirs of Captain Peter Drake

An Account of many Strange and
Surprising Events, which happened to
Him through a Series of Sixty Years, and
upwards; and several material Anecdotes,
regarding King William and Queen
Anne's Wars with Lewis XIV. of France

Born today in 1671 this famous Wild Goose's memoirs are up in full on Google Books and as it is birthday today I thought you might like a shufty.