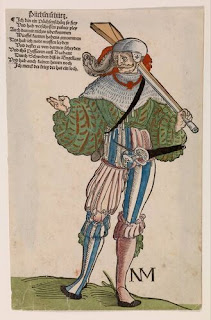 Today is the anniversary of this battle in Devon. I admit to being taken with this era. Landsknechts and arquebusiers in the Devon countryside?
The best site to learn about this is here.
If you are interested in doing this as a Living History project then go to the Commotion Times Facebook group.  Have ordered this book - I'll let you know when I have read it. 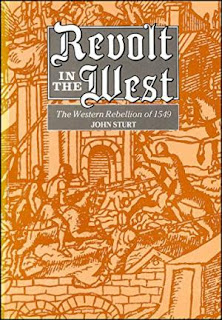 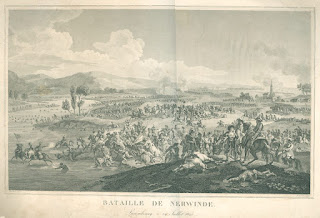 The Battle of Landen or Neerwinden was fought in present-day Belgium on 29 July 1693 during the Nine Years' War. A French army under Marshal Luxembourg assaulted positions held by William III's Allied army three times before driving them from the field. Both sides suffered heavy casualties and the French were unable to follow up their victory, allowing William to escape.  More here on the wiki
Posted by Ralphus at 03:03 No comments:

Today's anniversary. Wiki
Read about it here
Posted by Ralphus at 02:22 No comments:

New book for the Dutch army 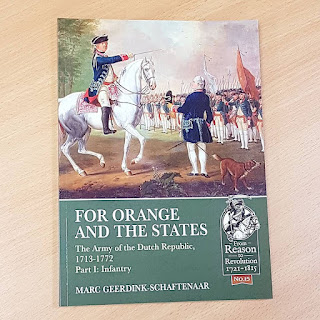 Should be good for the WAS
NEW: 'For Orange and the States. The Army of the Dutch Republic, 1713-1772. Part I: Infantry' is now in stock and available! The Dutch Republic was one of the great European powers during the 17th and 18th Centuries. Generally, the Dutch Republic was considered to have lost that status after the 1713 Peace of Utrecht; however, when the Republic entered the War of Austrian Succession in 1740, it was able to field an army of over 80,000 men. This expanded to over 110,000 men during the war, demonstrating that the Republic was still a European power to be reckoned with. The army of the Dutch Republic is a subject that sounds familiar, but is yet greatly undiscovered; little of it is known, unlike the armies of Britain, France, Prussia, and even the lesser powers like Sweden and Denmark. Historical sources of it, be it surviving items of uniform and equipment or paintings and prints, are unfortunately scarce. This study brings to light much material previously-unseen. Grab a copy now to find out more! http://www.helion.co.uk/new-and-forthcoming-titles/for-orange-and-the-states-the-army-of-the-dutch-
Posted by Ralphus at 12:24 No comments: 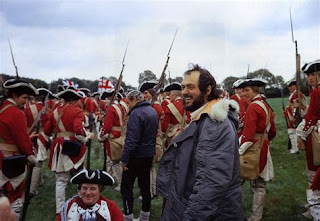 Today is Stanley Kubrick's birthday. If you have never seen Barry Lyndon before then maybe today could be the day.

St. Ruth's Fatal Gamble: The Battle of Aughrim 1691 and the Fall of Jacobite Ireland (Century of the Soldier) Hardcover

By Michael McNally and artwork by Sean O'Brogain.
This is a brilliant book. A quality hardback. I do have the original from 2009 but this one is much more augmented with new maps, appendices, and of particular interest some uniform plates and 3 pages of colour flag artwork. There are revised OOBs and more material on the siege of Limerick. Lots more depth.
Aughrim isn't as famous as the Boyne but it's far more decisive and much more interesting. No one-sided affair either - casualties are about the same on each side.  The author's battlefield photographs are excellent too so if you ever get there you can orientate yourself. Basically if you have an interest in the Williamite war this book will be very useful to you. Sean is probably the number one military artist for Ireland  and his knowledge makes the artwork stand out as being indispensible. Wargamers will love this.
Posted by Ralphus at 03:00 1 comment: 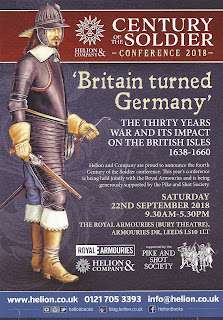 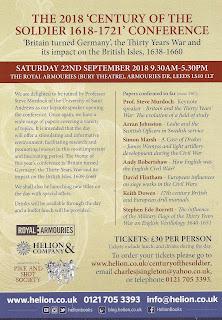 Next weekend. This annual eent in Scotland keeps getting better.
Posted by Ralphus at 07:31 No comments: 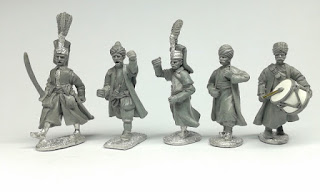 Some really excellent sculpts by Clibinarium for Warfare Miniatures - see more here
Posted by Ralphus at 03:15 No comments:

In 1985 folk group Strawhead released an album of songs inspired by the Monmouth Rebellion. Not my cup of tea as my brother bought me the LP one Christmas but I know some of you have fond memories of these tunes and its great that they have uploaded them onto YouTube. Find the others by searching Strawhead Monmouth.
Posted by Ralphus at 10:14 No comments:

CAPTAIN CARLO FANTOM, a Croatian, spake 13 languages; was a Captain under the Earle of Essex. He was very quarrelsome and a great Ravisher. He left the Parliament Party, and went to the King Ch. the first at Oxford, where he was hanged for Ravishing.
Sd. he, I care not for your Cause: I come to fight for your halfe-crowne, and your handsome woemen: my father was a R. Catholiq; and so was my grandfather. I have fought for the Christians against the Turkes; and for the Turkes against the Christians.
Sir Robert Pye was his Colonel, who shot at him for not returning a horse that he tooke away before the Regiment. This was donne in a field near Bedford, where the Army then was, as they were marching to the relief of Gainsborough. Many are yet living that sawe it. Capt. Hamden was by: The bullets went through his Buff-coat, and Capt. H. sawe his shirt on fire. Capt. Carl. Fantom tooke the Bullets, and sayd he, Sir Rob. Here, take your bullets again. None of the Soldiers would dare to fight with him: they sayd, they would not fight with the Devil.
Edmund Wyld, Esq., was very well acquainted with him, and gave him many a Treat, and at last he prevailed with him so far, towards the knowledge of this secret, that Fantom told him, that the Keepers in their Forests did know a certain herb, which they gave to Children, which made them to be shott- free (they call them Hard-men.)
In a Booke of Trialls by Duell in foli (writ by Segar, I thinke) before the Combatants fight, they have an Oath administered to them by the Herald; where is inserted (among other things) that they have not about them either Charme or Herb.
Martin Luther in his Commentaries on the First (or second Commandment, I thinke the First) saies that a Hard-man was brought to the Duke of Saxonies Court: he was brought into the great Hall and was commanded to be short with a Musquet: the bullet drop't downe and he had only a blew Spott on his Skin, where he was struck. Martin Luther was then by, and sawe the Bullet drop-downe.
Posted by Ralphus at 04:37 3 comments:

Ammiversary of this SYW battle today. Here's a diorama.
Posted by Ralphus at 11:05 No comments:

500 years ago today, in the city of Strasbourg, a woman named Frau Troffea woke to begin the second day of her manic and mysterious dance. Soon she would be joined by hundreds of others, compelled to dance for seemingly no reason at all, some so monomaniacally that only death would have the power to intervene..
Read more here
Posted by Ralphus at 06:21 No comments:

ST. RUTH'S FATAL GAMBLE. THE BATTLE OF AUGHRIM 1691 AND THE FALL OF JACOBITE IRELAND 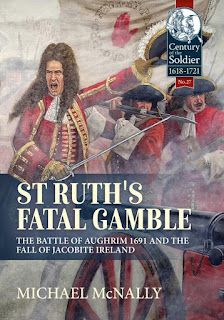 Released today on the anniversary of the Battle. By Michael McNally. New title from Helion.
Posted by Ralphus at 10:02 4 comments:

Carlo Fantom - a famous Croat in the English Civil War

Carlo Fantom (died December 1643) was a Croat mercenary in the English Civil War who had the reputation of being impervious to bullets and is quoted as saying "I care not for your Cause; I come to fight for your halfe-crown and your handsome women. My father was a Roman Catholique, and so was my grandfather. I have fought for the Christians against the Turkes, and for the Turkes against the Christians." Initially serving in Arthur Goodwin's regiment of horse, where he was valued by the Earl of Essex for training cavalrymen how to fight on horseback, in 1643 he changed sides to fight for the King. He was reportedly hanged at Bedford for raping a woman, while the army was marching to relieve Gainsborough.[1] Wiki
If you think this would make great fiction it's been done by Charles Underhill. Not sure what they're like. Maybe you know? 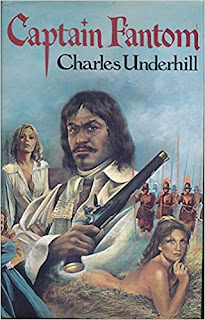 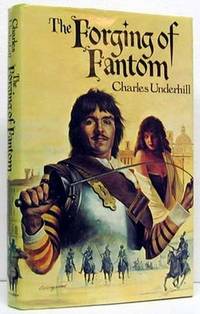 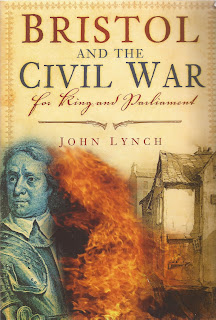 Got this today.  Looks really good. Has pictures by Alan Turton. Kindle edition is less than three quid 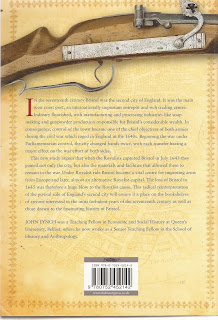 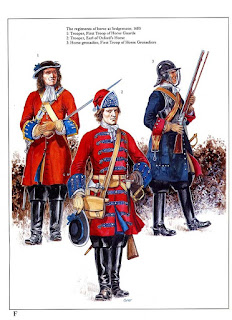 One of Osprey's most respected artists is retiring at 77. Read more about him here
See some of his work here
Posted by Ralphus at 09:35 No comments:

Today is the anniversary. Go to Steve Carter's excellent Warwalks site to read about it.
Posted by Ralphus at 02:04 No comments:

Alex Burns of Kabinettskriege Blog is on a research trip to Europe and has unearthed this account of Culloden from Lt. Colonel George Stanhope. Page here
Posted by Ralphus at 08:32 No comments:

Today's anniversary. One of my local battles. Thanks to David for the reminder. Wiki
Image from here
Posted by Ralphus at 06:13 No comments: 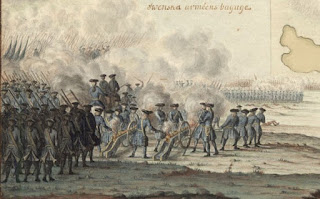 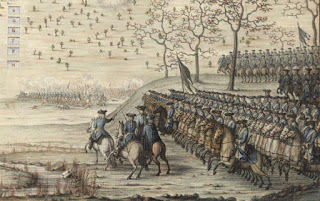 Had these on the blog before but I thought I would repost them as they are so good. Wiki on the battle
Posted by Ralphus at 05:44 No comments:

The Swedish Army of the Great Northern War, 1700-1721 (Century of the Soldier) Lars Ericson Wolke


I first discovered Charles XII and his adventures through a rather chauvinistic biography the Life of Charles XII by Frans G Bengstton (1961) it was enough to thrill me and start a life time interest in these epic battles and sieges in the Northern lands. Surrounded by enemies, Russia, Denmark, and Saxony they had an aggressive doctrine - was this myth? So when I discovered Helion had published a companion to the recent classic on the Russian army of the period by Boris Megorsky I was very optimistic. A modern treatment without the old Nationalism of the early Swedish writers.
First of all you have to say there are two armies under the glass - roughly speaking before and after  the disaster at Poltava (1709). The mythology of the Swedes is examined - their anachronistic use of the pike and its legendary cavalry all are examined. Chapters on the tactics and Battlefield performance get to the bottom of these areas in a scholarly and balanced manner. Uniforms are dealt with very comprehensively with reconstructions by Shamenkov of the Swedish army from 1700 until 1721. There are also uniform schematics.
For a wargamer there is all you need to field a Swedish force but as the Great Northern War lasted so long you will probably have to decide on an early GNW Swede force or later. The basic Swedish secret weapon (spoiler alert) was training pure and simple. The early Swedish army was drilled to perfection making battlefield manoeuvring easy and effective.
Helion are to be congratulated on another excellent addition to the study of the Great Northern War.
Posted by Ralphus at 08:00 1 comment:

Today is the anniversary of this the largest and bloodiest battle of the English Civil War.
Posted by Ralphus at 04:16 No comments: