We are travelling into the territory of the Deluge today. This is one of the best movies of the period. I know we've had this sequence before but some of you might have missed it.

If you have been sweltering in the heat maybe this footage of artillery being dragged through the snow might have a cooling effect. 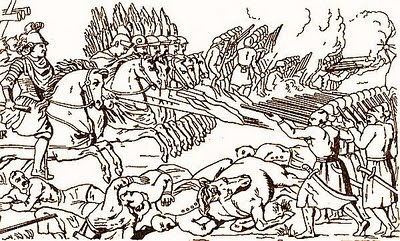 Fought today in 1651 this battle was fought between rebellious Zaporozhian Cossacks, led by Hetman Bohdan Khmelnytsky, aided by their Crimean Tatar allies, and a Polish-Lithuanian Commonwealth army under King John II Casimir.
Posted by Ralphus at 01:06 No comments:

Nice idea this - a video review.

By Forbes 1662. If you have ever reenacted the 17th century you would have probably sung this around a campfire but if you haven't here's the lyrics - other songs of the era here
According to the clan tartan page 'it's to the tune of "A Statute for Drunkards and Swearer" (1624)

This song was quoted by Captain Robert Monro in his memoirs of his service under Gustavus Adolphus. '
Posted by Ralphus at 03:00 No comments:

Fought today in the English Civil War. Wiki. The last battle won by an English King on English soil. Now famous for the site of an annual folk festival.
Posted by Ralphus at 02:20 1 comment:

Baku surrenders to the Russians 1723

Today this city fell to the Russians in the Russo-Persian War 1722-3.
Posted by Ralphus at 09:32 No comments:

ECW - Fairfax and others at Mapledurham House 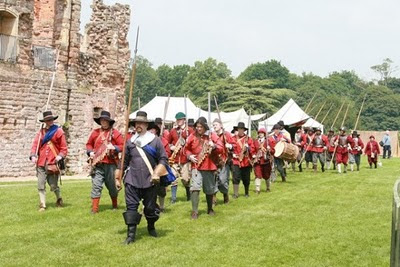 3 – 4 Jul 2010
Mapledurham House, Reading, Berkshire, RG4 7TR (map)
Event by my favourite ECW group - their bumph reads:
'After a period of 10 years, the Fairfax Battalia is proud to be returning to Mapledurham to transport the visitor back to the time of the English Civil War. This is an ideal opportunity to gain a taste of life in the mid-seventeenth century from one of the best re-enactment groups in the country. See how it would have been for both soldier and civilian, for ordinary people and aristocrats. Where they filmed ‘The Eagle Has Landed’ !!' See here for more details
Posted by Ralphus at 06:02 No comments:

Hoffman's Army of the Blue King 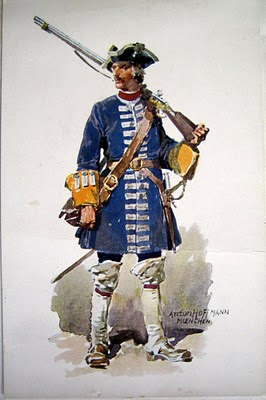 Depicting fusilier and grenadier of 1710. Sent in by Uwe of the History in 1/72 blog. He recommends anyone interested in researching this army to visit the Bavarian Kriegsarchiv in Munich. 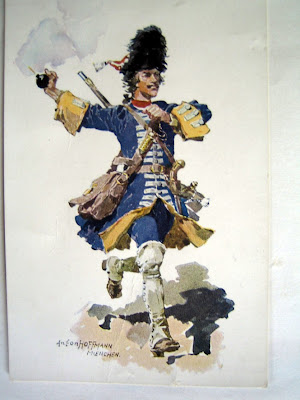 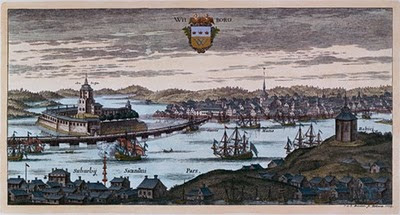 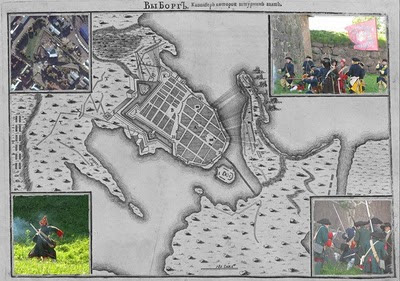 This is a report from Boris of the Great Northern war reenactment group of a recent 300th anniversary event at Vyborg.
The walls of the fortress facing harbour were breached by Russian siege guns between June 1st and 6th, 1710. However, Vyborg's land front and its key point bastion Panzerlax could not be damaged despite all efforts of Russian artillery. It was proposed to blow it up with "machine infernalis", but first the besiegers had to gain access to the moat. And the moat in front of Panzerlax was defended with small earthwork, a caponier. Fight for this caponier took place in the night, June 6th (it should be noticed nights are "white" in this region in early Summer). Unlike vast majority of other actions of GNW, this combat was described by common ranks from both sides, Russian and Swedish, who fought there.

Survived "autobiographies" of officers and NCOs of Second Grenadier regiment were written down in 1720 and they mention fight for the caponier where several grenadiers were taken prisoner by Swedes and were held in the fortress until its surrender (Second Leut. Tit Duganov, Captain-of-arms Stepan Kolesnikov). Others mention their participation in beating off a Swedish sortie at the caponier (Serj.Anton Yaroslavtsev, Capt.-Leut. Andrey Monastyrev).
Russian State Archive of Navy stores report from interrogation of Swedish Capt. Franz Fariol, Savolax regt, who was sent to reinforce the caponier, but his men abandoned him and he was captured.
The fight lasted all night and by morning Russians held the caponier. Storming Vyborg was appointed on June 9th and preparations were made to blow up the machine, but Governor started negotiations and assault never happened.

Thus, bastion Panzerlax survived the siege and 300 years after it; it stands in the middle of modern town in good condition. The place where the caponier stood is now a crossroads of two town streets and kids' playground. So we reenacted the fight between the playground and the bastion. Grenadier in re-created cap of 2nd Grenadiers started the battle and was indeed captured prisoner, Swedes left prisoners as well and withdrew to within the bastion. This was the first day of commemorations of 300 anniversary of taking Vyborg.

Here I posted pictures http://lgpp1709.livejournal.com/18295.html with contemporary map supplied with modern view of the bastion and with photos from our event there. I also put original words from real combatants into mouths of reenactors.
Posted by Ralphus at 01:37 No comments: 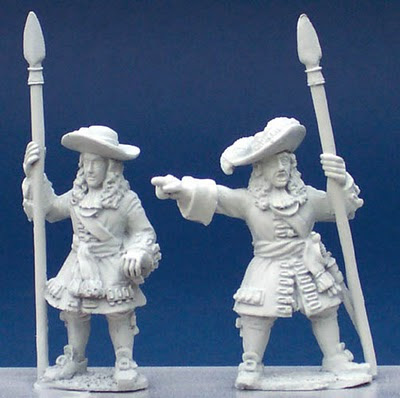 The Duke of Monmouth declared himself King. What better way to celebrate it than to post a pic of the new Front Rank range which looks absolutely perfect for the Monmouth Rebellion though I am sure you know that already.
Posted by Ralphus at 04:30 No comments: 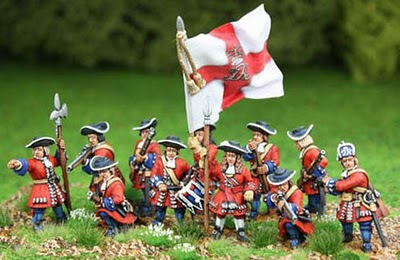 They look good. See them in 360 degree rotation on their website. Many infantry types illustrated...mostly suitable for the Monmouth Rebellion, League of Augsburg, Williamite war in Ireland etc.
Posted by Ralphus at 05:10 1 comment:

Battle of the Gabbard


This naval battle of the First Anglo-Dutch war was fought today in 1653. It culminated in a rout by the Dutch navy and control of the Channel passing to the English.
Wiki here
Posted by Ralphus at 01:55 No comments: 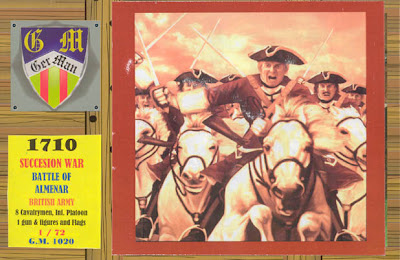 ...And, unfortunately, fail to clear the bar yet again. PSR has just announced the release of BUM's latest set for the Spanish campaign of the WSS, "Battle of Almenar British Army" with full details here.
To be completely fair, the sculpting does seem a bit improved on this lot, but the set is more noteworthy for it's shortcomings than for it's features. To wit:

All things considered, well short of the mark. If one were to consider fielding an army for this period, you would be better-served by using Zvezda's Russian Infantry of Peter the Great (reviewed here) and simply painting the lower legs as gaiters with painted-on buttons. It's really a bit sad, as many gamers and modeler's were, I'm sure, excited over the announcement of a dedicated range depicting the Spanish/Catalan campaign, and the sculpting quality has improved over time. They just can't seem to get the execution right. As always, the opinions and laments offered are my own.