Pikemen and Matchlock Musketeers should be available for Aug/Sept with the Cavalry following in the Autumn 2010."

This Bank Holiday weekend (2nd to 3rd May) in Dorset is the ECWS, reenacting events from the turbulent period of Charles I's reign. Details here
Posted by Ralphus at 10:43 No comments: 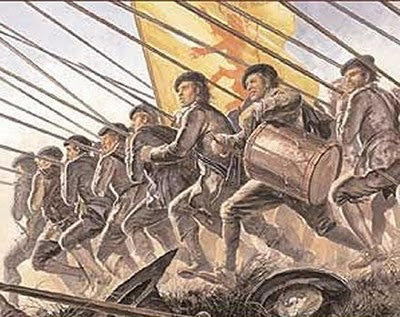 Today this battle, part of Montrose's last campaign, was fought. Wiki on the battle.
More on the battle here and here at the Scotwars site.

I don't really know anything about the Scottish campaigns, or Montrose's army so I have used this unusual image by the ever reliable Gerry Embleton for the Osprey book on Auldearn 1645 by S Reid.
Posted by Ralphus at 05:50 No comments:

Tony Reidy has brought to my attention that I misunderstood the exact breakdown of poses on each sprue in my last post, for which I humbly apologise. here is Tony's "official" description of the 3 figures on each sprue:

"One quick correction - 2 figures on the sprue will be 1-piece (one with one leg forward, other with the opposite) in "march attack" walk. One-piece except separate heads/sword hanger.

Third figure will have - one set legs (moving forward) - 4 torsos (one to make one more "regular" troop, one to make a drummer, two with officer sashes - one around waist, one over shoulder.

With 12 sprues in the box - 12 figures per set (1/3) are up for grabs as officers, grenadiers, sergeants, standard bearers, drummers, etc. H*ll, you could make 12 drummers if you REALLY wanted! ;-)"

WF's designer/virtual sculptor, Tim Barry, was occupied with other matters for a while, but is now back at work on this range and making some of the corrections/changes that have been pointed out (where they could be documented) to WF. As to the "style" of the figures, I've offered my comments and critique (I prefer the anatomically-correct Minden/Stadden/Huzzah style) to Tony and Tim, and passed on yours as well, and here is Tony's reply:

"I know of the Minden range - and this is all just personal preference -
but I really dislike them. I feel they are just too stiff and reedy -
but I can see why some people like them.

I REALLY like the Perry figures - and these would match up perfectly
with their proportions."

So, if we can assume that the Perry figures also might include Foundry's Marlburian and LoA ranges as well, then this should allow gamers and collectors to field some very diverse armies. If the Wargames Factory figures are in line with their other 12-sprue sets, then these should price out at around $20-25 (USD) per box of 36 figures, certainly a reasonable amount for battalions. Then, using the Foundry (or similar) figures, one could add "special" command vignettes and dioramas, and possibly some specialist troops. Even with Foundry's higher pricing, the net effect will be a fairly affordable army. This will be especially true when WF produces the matching "generic" cavalry. As I told Tony, some will like them, some will not, some will buy some of everything and mix them regardless of style differences; you can't please everyone. As they say, "Different horses for different courses."

As for me, I will still assist Tony and Tim in any way that I can and await the finished product before I get too worked up one way or the other. As I primarily game in 15/18mm, If I decide to go this route, then this will be a new venture for me with no existing collection to try and match. Therefore I will be able to make a reasonably unbiased decision with my dollars as to which I prefer to paint. But, these Wargames Factory figures will certainly get my attention and I'll be doing some samples before I decide.

News of Interest From Wargames Factory 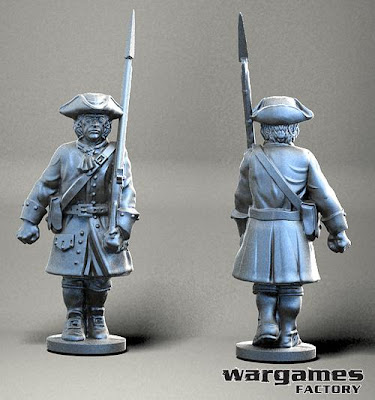 There is an on-going thread on TMP right now started by Tony Reidy of Wargames Factory that should be of interest to our readers. As many may already know, through WF's "Liberty & Union League" special request subscription process (similar to Eureka's 100 and 300 Clubs), there was already a "generic" WSS infantryman and cavalryman open to subscription. Well, the subscriptions filled up so quickly that Tony has had to "adjust" the numbers twice already to allow more people to subscribe (something to do with their site programming). Based in part on this rapid response from the gaming community, Tony's interest was piqued enough to start doing a bit of research himself on the period, and the result is that we will now get an actual "range" of figures for the period in brilliant hard styrene plastic (like the old Airfix and Historex kits), in 1/56th scale (or 28mm if you prefer).
Their current plans for the infantry are as follows: 3 figures to the sprue and 12 sprues to the box, for a 36-figure battalion. One figure will be a one-piece casting, as pictured above from WF's Forum and previewed by Tony; one will be as above but with separate head allowing some slight pose variation with turned heads; and the final figure will be a "kit", a pair of legs and four separate torso's depicting an officer, an ensign, a sergeant and a drummer, all with appropriate lace and sashes where required. There will also be separate arms and equipment for the last "multi-part" figure, allowing some individual animation for the supernumeraries. Tony is actively seeking feedback from potential customer's to finalize this sprue and take it to production by early Summer. Then he can move on to the cavalry, which will have a similar theme to it's sprue makeup.
These figures are not being "hard sculpted" in GreenStuff as many of us are used to. They are being "virtually sculpted" using a state-of-the-art computer modelling program which will then transfer data to the CNC cutters that make the steel injection molds required for styrene. Several changes that have been suggested were implemented by Tony's designer overnight, literally! I have samples of their Vikings, Saxons and Numidians and the process works brilliantly!
Several of us are actively trying to convince Tony to do separate headgear as opposed to complete heads with headgear, as this will allow for the most flexibility. He already plans to offer options for hatmen, grenadier's mitre and bearskin, and a fusilier's cap. He also plans to either offer pikes or (if I can convince him) just pike heads so that you can use your own rods, wire or whatever for the actual pike. The torso's of the ensign and the sergeant are generic enough that they would do double-duty as pikemen. If we can convince him to go the separate headgear route, then he does have an interest in providing a round floppy hat as well, making these useful for most armies back into the late 17th century as well. Good stuff indeed!!
Here's an interesting bit: In addition to the thread on TMP, I have exchanged personal correspondence with Tony and have provided him with several references and Late 17th Century pieces of artwork to assist him, at his request! It seems that when Tony's own interest level began to rise, and he attempted several Yahoo searches using various search terms relating to Late 17th Century uniforms and equipment, our blog always came up in at least the top 10, if not the top 5! Hence, his contact with me with the request, and the offer to help provide some sources for him to consider.
I would like to hear from our faithful reader's out there; what think you?
I already know some of the potential objections: They don't look like Stadden's, Willie's, Ericksson's or Frank Hammond's "Minden's", they are a bit chunkier than those. Why are they so static and boring looking, where are the lads running about waving their arms all "willy-nilly"? Why only three basic poses, and really all just variations of one pose, where are the figures for the Firing Line, the Bayonet Charge? Well, in part this is because of their title, "Generic WSS Infantry", and in part, it seems to be what most people think of when they picture the massed early battalions of the late 17th and early 18th Century's. The chunkiness, I don't know, although they are not as hefty as many of their competitors in this regard.
I will be closely following further developments in this design process and will report when there is significant news. Overall, I'm excited, this could get me to do something other than 15/18mm for a change! And if their recent Vikings, Saxons and Numidians are any guide, they will be very, very affordable, never a bad thing.
Bill
Posted by Sir William the Aged at 05:51 11 comments: 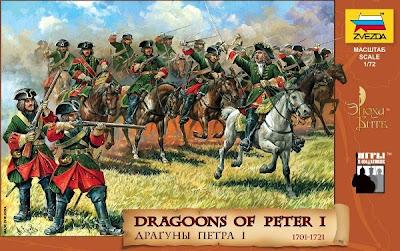 Well, according to both PSR and Zvezda's own site, the long-awaited Russian Dragoons for the GNW started shipping on April 1st, close-on the heels of the Swedish Artillery.

From an "artistic" standpoint, these figures look lovely! If one can judge by the painted samples and the box art (which with Zvezda you usually can), then these are just what many gamers and plastic aficionado's have been waiting for. Unlike their Swedish Dragoon set, this time you actually get several dismounted Dragoons, 9 to be exact (3 X 3). Two of the sculpts are very useful firing and "at the ready" poses and the third is a very welcome horse holder with reins leading to two mounts. This time it is the mounted side that appears to suffer a bit. There are only six actual troopers included, in two poses (2 X 3), along with four single Command figures. Three of the Command figures are great sculpts, while the fourth is what seems to be the obligatory fellow (the Ensign this time) shooting his own saddle-mate with his pistol. 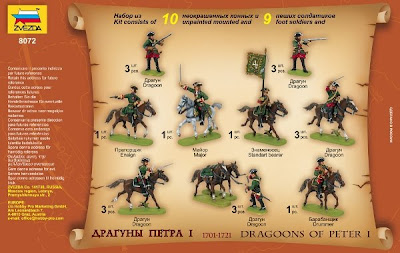 While these sculpts are good enough to justify the wait for them, I'm sure I'm not alone in wishing that Zvezda understood something of the "mechanics" of wargaming. Had they added three more dismounted figures, you would have the usual number of twelve total for a dismounted squadron, with one-quarter being detailed as horse holders, about right for most rules of the period. Then they could have ditched the Ensign shooting sideways (never a good thing morale-wise) and added three more of another pose of a mounted trooper, giving nine troopers and three Command, again, a twelve-figure squadron that would have been about right for most rules. I think, my opinion only as always, that this would have greatly increased their value to most gamers even if there had to be a slight cost increase for the box set.

Now, as to the actual sculpting choices, for some odd reason (catering to the dioramists or non-gamers?) both the Ensign and the Drummer appear to be on slowly-walking horses, almost standing, while all of the other mounted figures are on cantering, trotting or galloping steeds. While many gamers will purchase multiple boxes of these and mix-and-match the horses, it is a bit distracting from the quality of the set. Zvezda also appear (by the shot of two of the sprues) to have employed the separate arms for the dismounted figures again. They do look right for their poses and actions, but as we have seen before, all does not always go as planned when assembly time arrives! The horse holder with one separate arm holding reins leading to one of the two included horses will have to be carefully assembled if this pose is to work properly. 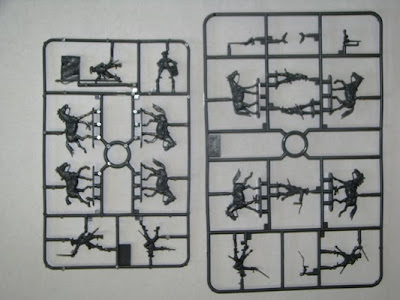 We shall have to wait for PSR, or our friend Will McNally (who has been beating PSR to the punch quite a bit lately), to actually review the figures "in hand" for a full report, but I would say this is a "good effort" by Zvezda, if perhaps a bit short of the mark in actual execution. Now if they will only get on with some heavier cavalry! Many gamers and modellers are waiting for these, as they should easily exceed the quality of the available Strelets and BUM offerings. As always, the opinions are my own, your actual mileage may vary.
Bill

Battles of the Anglo-Dutch wars