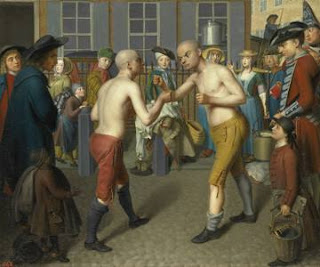 from here
Posted by Ralphus at 07:36 No comments: 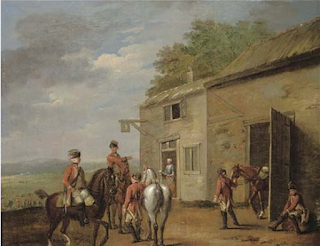 Soldiers of the Light Troop of the 9th Dragoons outside a tavern, an encampment beyond , 1762 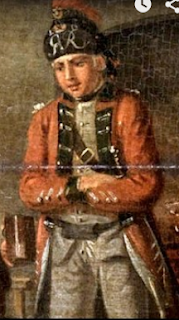 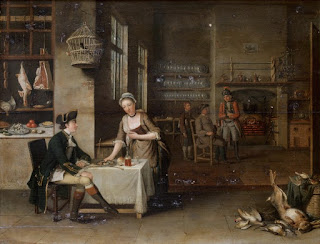 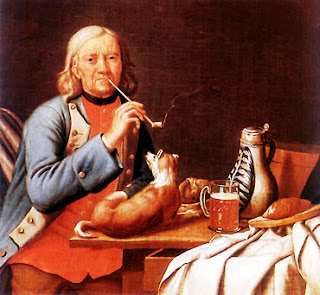 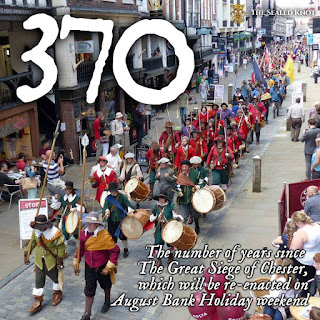 'Come and watch us re-enact The Siege of #Chester 370 years on - for FREE! From Saturday's march to commemorate the siege's victims to Sunday and Monday's battles, it's an ideal family weekend - see more details at www.earlofmanchesters.co.uk'

The Russian army of Peter the Great

Photo by Alex Goss
Posted by Ralphus at 06:48 No comments:

The Western Uniforms of Peter the Great's Army 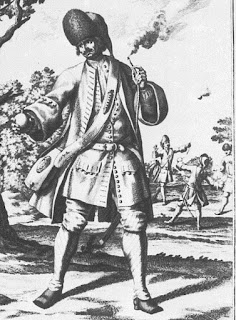 The introduction of Western costume in Russia was a part of Peter the Great's reforms and, as such, it has been subject to research by many authors. However, research never ends and new evidence keeps surfacing that helps to adjust, refresh and update our view on a typical "Petrine" soldier. Based on first hand sources and the most recent academic research, as well as on illustrations and surviving relics of the period, the author proposes corrections to the contemporary common understanding on how elements of the costume - headgear, dress and footwear - looked like, and what were the authentic ways of wearing it.
here
Posted by Ralphus at 16:33 No comments: 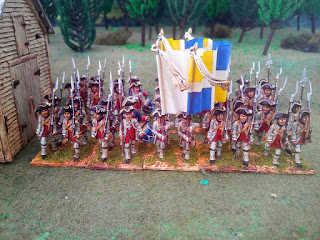 I don't know why I haven't seen this blog before but it is excellent - especially the SYW pages.  I was initially drawn to it by the portraits of mid eighteenth century Hanoverian officers but soon found myself appreciating the figures - especially the French which uses the Black Hussar Miniatures - IMHO the best French SYW on the market in this scale. He also has some pretty good 40mms to check out. 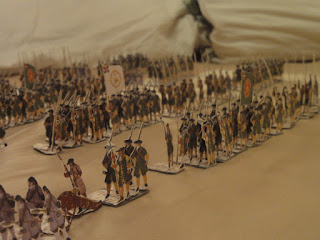 This is an excellent website. SYW and the Scanian War (pictured) are among the subjects covered including a 1:1 ratio of many subjects. 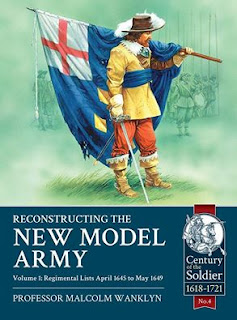 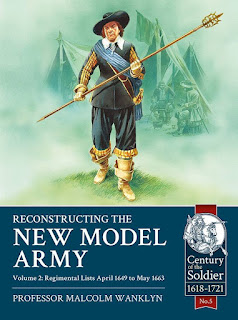 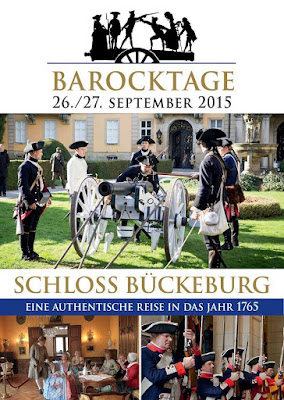 THE POOR MAN OF TOGGENBURG being THE DIARY OF ULRICH BRÄKER 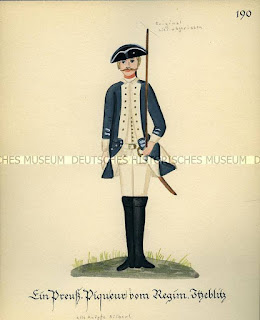 This was found by Michael Wosniak on my Seven Years War Facebook group - it's the memoirs of a common soldier in the Itzenplitz regiment -  translated into English. Only a certain amount of the memoir concerns his time in the Prussian army but it's worth dipping into.Here's a section of when he joins the army

In the afternoon the sergeant-major brought me my bread-ration and my weapons, and asked me if I were now better content with my situation. "And why not?" answered Zittemann for me, "He's as good a lad as you can find." Then I was led into the uniform store, and fitted out with breeches, boots and gaiters, and given a hat, a stock, hose and so forth. Then, together with about twenty other recruits, I was sent to Colonel Latorf. They led us into a hall as big as a church, brought out some banners, all tattered and torn, and ordered us each to take hold of an edge. An adjutant, or somebody, read us out a whole pack of Articles of War, and pronounced some words which most of us murmured after him. I kept my jaw shut 48, thinking of nothing in particular, Ännchen maybe; then he waved the flag over our heads and dismissed us.

I was still off duty for the first week, and went about the city to all the drill-grounds, and watched the officers inspecting their men and whipping them, so that in anticipation the sweat of fear stood out on my brow. I therefore asked Zittemann to show me the arms-drill at home. "You'll soon get the knack of it", he said, "but it's a question of doing it quickly. You must be able to do it like lightning!" Whereupon he was indeed so kind as to teach me everything: to keep my weapons clean, and to press my uniform, and to dress my hair after the military fashion and so on. Following Cran's advice, I sold my boots and bought instead a small wooden chest for my linen. In my lodgings I practised the arms-drill assiduously, read in the Halle hymn book 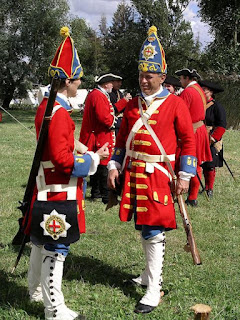 Photos of the 2004 reenactment here 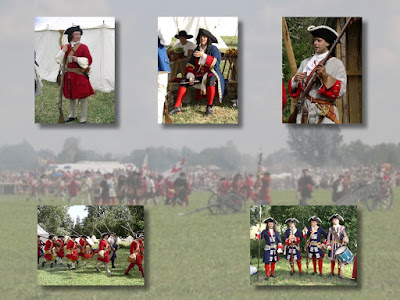 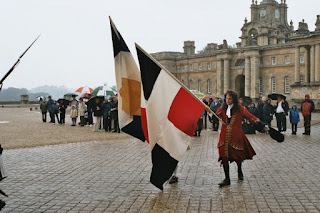 Today is the anniversary of this famous battle. Wiki here
Picture is of me at Blenheim Palace in 2004
Posted by Ralphus at 03:56 No comments: 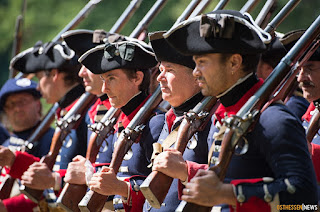 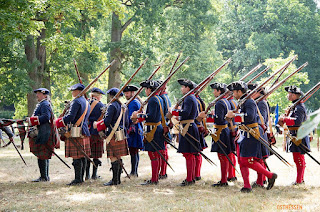 As a French sympathiser I am impressed by this Franco-German formation that was drawing a lot of attention from people at Fulda. Images from here

Here for some photos of the weekend's activities.
Posted by Ralphus at 07:26 No comments:

Hessians in the UK 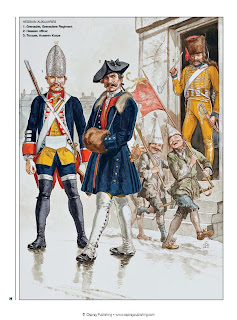 People know about the Hessians and the American Revolution but what people dont realise is there is a long tradition of using the Hessian's skills as auxiliaries  and it went on for some years. Hessians were brought over in the Jacobite Rebellion (see image) and in the early part of the Seven Years War to counter French invasion plans. Image from here
See the Penicuik drawings the above artwork is based on here
Posted by Ralphus at 06:14 No comments: 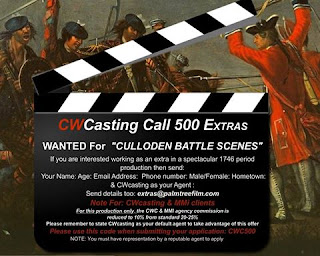 Read about the  movie here 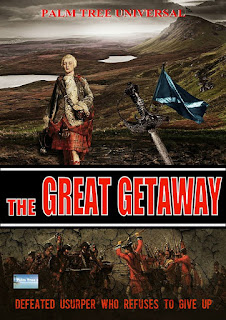 Uniforms of the Allied army in Flanders in 1748 by H. Bleckwenn. Part 4: Hessen-Kassel Infantry 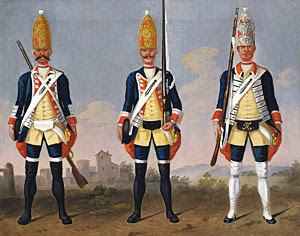 A teaser for the upcoming short movie "An Autumn Duel" that takes place during the Great Northern War 1708.
Posted by Ralphus at 08:01 1 comment: 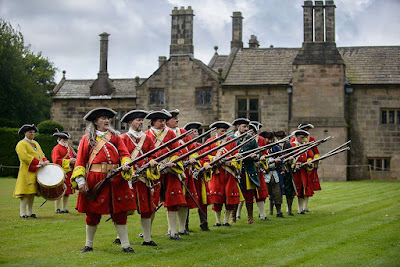 The Queen's Regiment at Hoghton Tower, Lancashire for the Battle of Preston 1715.
Photograph: John Beardsworth — at Hoghton Tower.
Posted by Ralphus at 03:30 No comments: 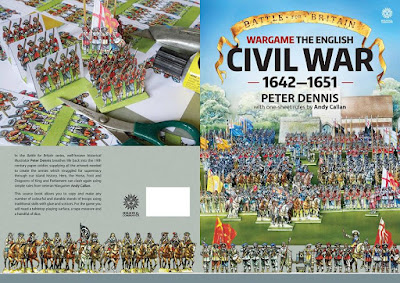 Not sure when this is out but it looks brilliant.
If you can't wait try these 1745 paper soldiers by Peter Dennis on the Wargames Illustrated site
Posted by Ralphus at 08:42 2 comments: