This is interesting. A painting purportedly of Sedgemoor on an auction page. 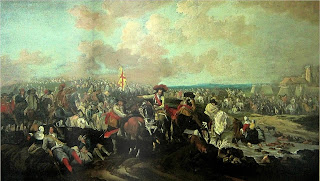 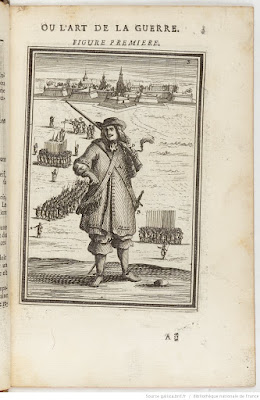 Here
Posted by Ralphus at 11:56 No comments: 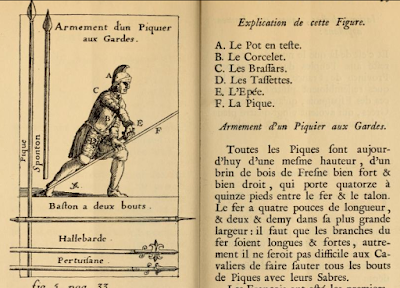 From here
Posted by Ralphus at 06:45 No comments:

The Massacre of Glencoe 1971

British movie starring James Robertson Justice on the massacre in the 1690s. Thanks to Matt Stephen
Posted by Ralphus at 08:28 No comments: 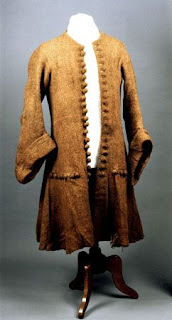 If you are getting ready for the reenactment of Sedgemoor in late July then this coat is worth looking at. It was found in a peat bog. There is a detailed description here
Posted by Ralphus at 08:21 No comments:

Here for details
Posted by Ralphus at 01:44 No comments:

This movie has been impressing the critics at Cannes.
LA MORT DE LOUIS XIV - TEASER from CAPRICCI Films on Vimeo.
Posted by Ralphus at 04:18 No comments: 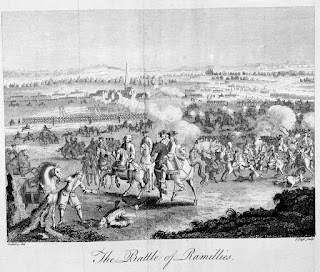 Engraving by J Pass after Godefroy, published 1797.
In 1706 King Louis XIV of France wanted to avenge the defeats inflicted on him in 1704 by the Grand Alliance during the War of the Spanish Succession (1702-1713). Marshal Villeroi was therefore pushed into leaving the safety of the lines of Brabant and crossed the River Dyle with 60,000 men. On 23 May 1706, the Duke of Marlborough attacked him at Ramillies. Marlborough put pressure on the enemy left wing, causing the French to reinforce it with troops from their centre and right. He then shifted his reserves to the right. After a close-fought cavalry battle, in which Marlborough himself led a counter-charge, the French were routed. They lost 18,000 men to Marlborough's 3,600. The victory enabled Marlborough to drive the French from almost the whole of the Spanish Netherlands.

This is an impressive project I only just heard about. Website here
It says
Bound to the tradition of the former strong-hold of tin figures, Nuremberg, our manufactory produces completely handmade toy soldiers made from pewter in the size of 40mm eye-level (plus headgear) for the SYW (Seven Years War) and AWI (American War of Independence). Not only two types have exactly the same posture!
Posted by Ralphus at 06:25 1 comment:

Never seen this at the cinema - maybe one day. Here's a still or two from one of my favourite scenes. 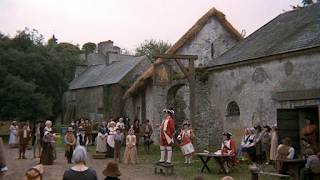 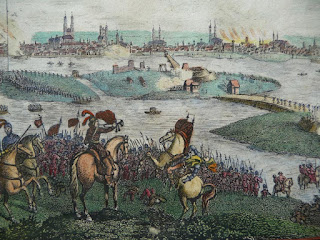 1631 – The city of Magdeburg in Germany is seized by forces of the Holy Roman Empire and most of its inhabitants massacred, in one of the bloodiest incidents of the Thirty Years' War.
Posted by Ralphus at 00:53 No comments:

Here to read this fiction set in the Monmouth Rebellion
Posted by Ralphus at 04:06 No comments:

Wiki. Today is the anniversary of this 30 Years War battle and a good excuse to wheel this clip out.
Posted by Ralphus at 03:03 1 comment:

Departure of Soldiers to a Battle 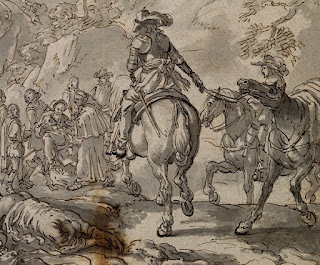 Originally, this unsigned wash drawing of soldiers leaving for battle was attributed to Johann-Philipp Lembke, but it is now considered to be the work of Jacques Courtois (1621-76). Courtois was a French painter who lived most of his life in Italy; he is also known as Il Borgognone. Following his training as an artist, Courtois served in the French military. He is widely recognized for his depictions of battles, often done in wash drawing. This style, which is produced by applying a series of monochrome washes over a pen or pencil outline, was very popular with 17th-century landscape painters. The pen defines the image, while the washes provide depth. The drawing is from the Anne S.K. Brown Military Collection at the Brown University Library, the foremost American collection devoted to the history and iconography of soldiers and soldiering, and one of the world’s largest collections devoted to the study of military and naval uniforms.
Posted by Ralphus at 03:17 No comments:

Oliver Cromwell at the Battle of Worcester

Sir Jacob Astely's posted this on their FB page - never seen it before. 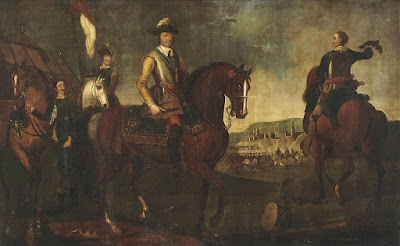 The departure of Charles II from Scheveningen, 1660 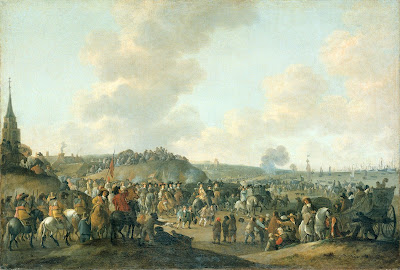 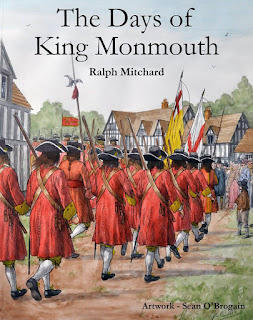 I've reprinted my day-to-day guide to the Monmouth Rebellion with more colour photos and images. Get it from here
Review here 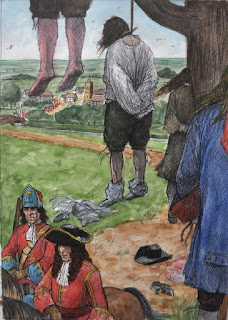 The exhibition “La Maison du Roi”, shown with great attendance from 4 December 2015 to 6 February 2016 at the National Archives of Milan, reconstructs the opulence of the dress attire of the guards of the kings of France, from Louis XIV to the Revolution, with absolute authenticity – based on archival research
Posted by Ralphus at 05:25 No comments: 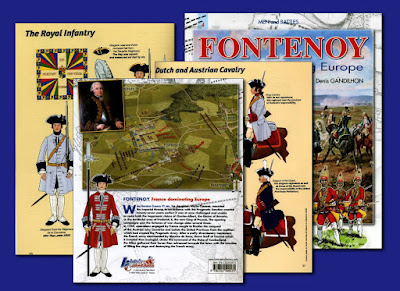 As it's Fontenoy day today I thought I'd feature some Irish reenactors. Here's a really good gallery of images and paintings.
Posted by Ralphus at 04:27 No comments: 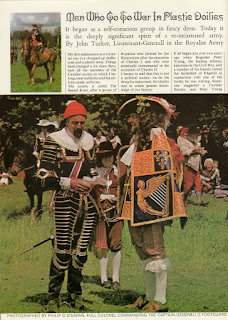 Great piece on Legatus Hedlius' blog From Matchlock to Doglock on the SK from Mayfair magazine in 1970 discussing the formation and rules and so on. Recommended.
Posted by Ralphus at 09:16 No comments: 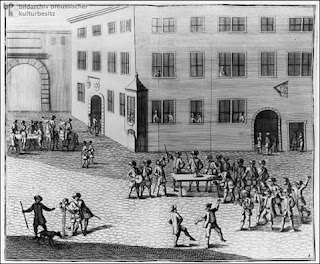 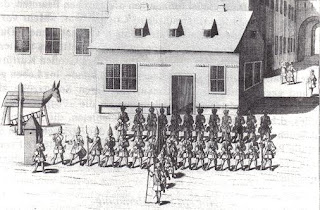 This book has got the thumbs up from people on my Seven Years War Living History FB page. It's a fresh non-Frederician take on the war. 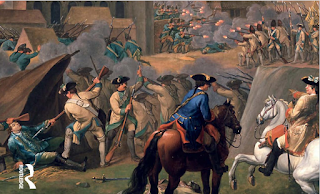 In this pioneering new work, based on a thorough re-reading of primary sources and new research in the Austrian State Archives, Franz Szabo presents a fascinating reassessment of the continental war.
Professor Szabo challenges the well-established myth that the Seven Years War was won through the military skill and tenacity of the King of Prussia, often styled Frederick “the Great”. Instead he argues that Prussia did not win, but merely survived the Seven Years War and did so despite and not because of the actions and decisions of its king.
With balanced attention to all the major participants and to all conflict zones on the European continent, the book describes the strategies and tactics of the military leaders on all sides, analyzes the major battles of the war and illuminates the diplomatic, political and financial aspects of the conflict.
Posted by Ralphus at 03:04 1 comment: 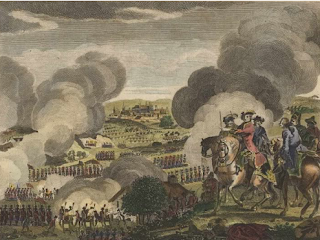 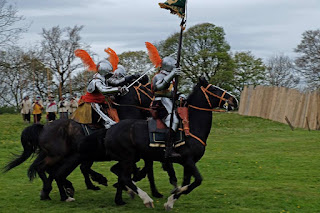 Photo Bolsover EH.
When I posted about this group a few weeks ago I was shocked by how many people saw it. 387 to date.  Now they have a Facebook page, Lots of images to peruse.
Posted by Ralphus at 12:04 No comments:

SOHO - The Pitchfork Rebellion. With Chris Harris and David Foot.

Documentary of the Battle of Sedgemoor 6th July 1685. Features Westonzoyland and Bridgwater. Produced by HTV West in 1985. Featuring the Sealed Knot society. And David Chandler
Posted by Ralphus at 08:05 No comments: 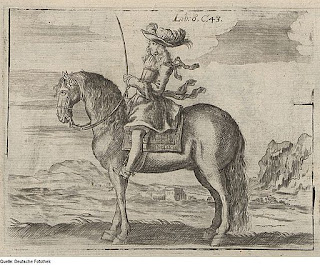 From here
Posted by Ralphus at 06:02 No comments: 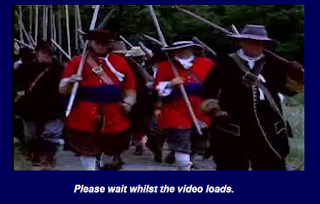 Go to the Zoyland Heritage Fund page scroll down to a link that says Battle Video and there's an impressive little film of the Battle of Sedgemoor.
Posted by Ralphus at 04:39 No comments:

The public page of Colonel Nicholas Devereux's Regiment of Foot

Devereux's my old ECW regiment has a new FB presence  - Facebook page here.
Next event they're doing is the late May Bank Holiday at St Fagan's.
Welcome to the public page of Colonel Nicholas Devereux's Regiment of foot. We are a 'progressive' re enactment group based within the Roundhead Association (RA), part of the English Civil War Society (ECWS).
The original regiment fought for the Parliamentary cause, in the Cotswolds and surrounding areas. Today's regiment is based principally throughout the West Midlands, along the Welsh Marches and across the South West.
Posted by Ralphus at 05:36 No comments: 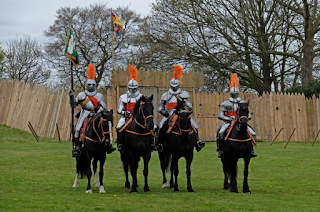 Civil War EH event.
Posted by Ralphus at 02:40 No comments: