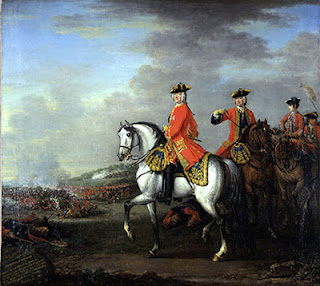 This battle was fought today in 1743. The last time a reigning monarch led the British army in battle. 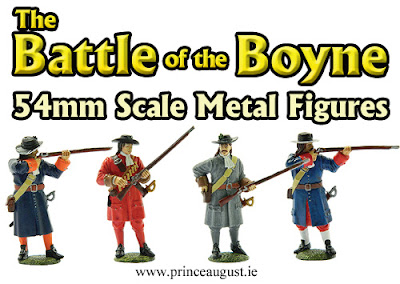 Just announced on The Miniatures Page (TMP) here, and on Prince August's own site here, is a potentially exciting new range of 54mm white metal figures for the Battle of the Boyne. These 4 figures, according to the announcement, were sculpted by Prince August's own in-house sculptor, Chris Tubb. The figures are sold as unpainted, but pre-cast, kits requiring minimal assembly and painting at €19.95; or as assembled and well pre-painted figures at a retail of €39.99 each.

Now, when I use the word "potentially", it is because I have a few issues with this release.

1) Why are these only being offered as pre-casts at a collector's price? The pictures of the un-assembled kit don't reveal and drastic undercuts, they are already in kit form, and the uniforms are somewhat "generic" for the period (although Chris has captured variations in the details that are reflected in period illustrations). These would seem to be ideal for drop-cast molds like PA's other 54mm offerings, and would certainly benefit the potential customers if they had the ability to cast up quantities of these with the final cost dependent on amortizing the mold cost and whatever source they use for metal.

2) Since assembly is already required, why fixed heads versus a plug-in separate head that would allow buyers to easily create variations?

3) If the sculptor is "in-house" as advertised, and presumably PA controls the casting process, why the higher price point? Admittedly, this price is not out of line with other collector's grade figures from sources like Dorset, Britains, or Traditions, but in my opinion is very much outside the range of typical wargamers, even for skirmish games not requiring many figures. Most gamers would probably turn towards Irregular's similar range, though actually for the Restoration period and Franco-Dutch Wars, since they are priced more in the range expected by gamers and quite as well done. Plus, Irregular's range is already larger with available command and cavalry. In fact, two of Irregular's cavalry castings will cost about the same as one of the new PA foot figures! 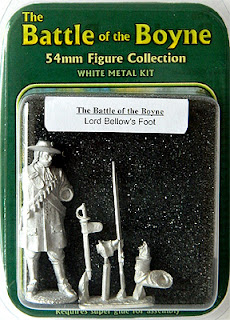 Obviously it is up to you, as both the reader and potential buyer, to determine the value of these figures. To me, this is a great effort that took a sadly mis-guided wrong turn. When I first saw the announcement, I was actually very excited at the thought that I might be able to cast my own LoA figures for some skirmish gaming or even for some old-school 54mm gaming in units of 16 or so figures. I'm not likely to do that at €19.95 each.

Bill
Posted by Sir William the Aged at 17:39 No comments:

Danish film about the love affair between a Queen and her physician. Centred on the reign of the mad king Christian VII. Wiki
Posted by Ralphus at 04:13 1 comment: