A detachment led by Colonel Okey captured Bath in a surprise dawn attack on 31 July.

Event near me in 1645. Can't find out much about it. New Model Army in the West BCW project

The Greatest Marshals of Louis XIV with René Chartrand.

Before Napoleon’s Marshals, Louis XIV had his own collection of larger than life personalities to bring him victory, René Chartrand tells us about them.

Thanks to Elliott for this.

News of a new set.

One of the living historians involved in recreating 1549 this weekend is also a talented painter and he did these figure made by the Assault Group. 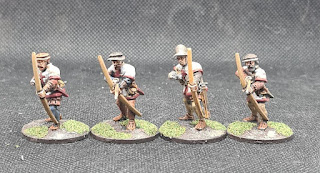 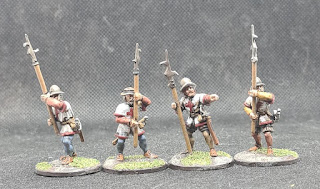 Comprehensive and absorbing guide to the early Tudor military

I thoroughly enjoyed this and would recommend it to anyone interested in the military aspects of the early Tudors and their forces. The book starts at Bosworth and ends in the reign of Mary and Philip. Davies has his own thoughts about the military revolution and puts forward some convincing ideas about the English perspective of this era. The book starts off with a history of the various campaigns in categories like Rebellion, Conflict with Scotland and Wars with France. Then the book focusses on the armies and its constituent parts such as cavalry, artillery, bow and gun, pikes, and so forth. All of the various battles are covered including Flodden, the Battle of the Spurs, Pinkie and many more. There is a good section on Fortifying the Realm about the Device forts built by Henry VIII along the South coast. One of my favourite chapters is an analysis of the Cowdray House engravings. These detailed pictures are reprinted and examined. The author likens them to the Bayeux tapestry but for the Tudor era.

The work itself is substantial with a pleasant colour section of living history enthusiasts recreating the Militia of the 1540s. Other subjects covered are recruitment and discipline, professional soldiers. All in all an inspiring work that will hopefully fill the void of books on the subject. 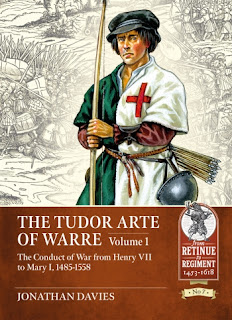 Information here
Posted by Ralphus at 08:32 No comments:

Event this weekend at Exeter 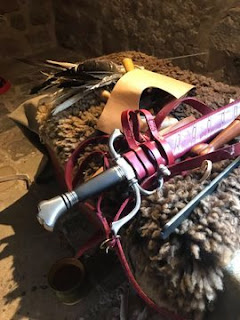 16thc Living History this weekend at Exeter on the theme of the 1549 siege. Details here

Join us for our Exeter Siege Re-enactment Days, 31 July - 3 August, 11-4pm! Commotion Times are back to re-enact Tudor life in 1549 at St Nicholas Priory! Learn about Tudor surgery, weapons and armoury, Tudor dance and try some Tudor children's games. Bring a picnic, and if you have one - wear your medieval costume! Free admission, Covid-secure

One of the victorious French army at Hastenbeck  Navarre were one of the oldest French regiments. Kronoskaf 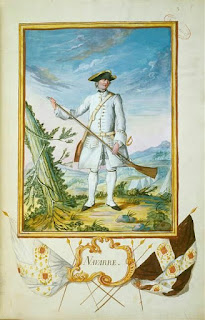 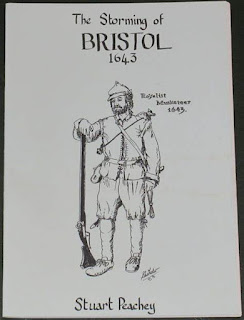 Today's anniversary. Wiki.  Stuart Peachey has done a booklet on it. He has an impressive range of publications on actions of the ECW and lots more which are worth checking out. Buy the booklet here
Stuart Peachey's ebay page
Posted by Ralphus at 06:07 No comments: 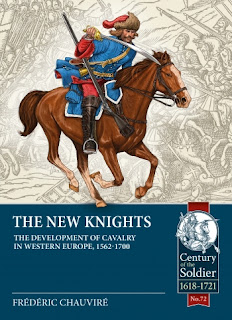 Bumph reads: From the middle of the 16th century to the early years of the 18th century, cavalry experienced significant changes in doctrine, deployment, and the equipment it used. The Men-at-Arms, carrying lances and arranged in large formations, were replaced by more lightly-armed cavalrymen fighting with swords and pistols in new and more flexible tactical formations. These transformations have often been interpreted as a symbol of decline in the cavalry, an archaic arm, a conservator of chivalric values, incapable of adapting to the new transformations in the art of war. This book aims to deconstruct this simplifying vision by focusing on an analysis of what constitutes the principal combat action of heavy cavalry: the charge. Whilst centred on France this study refers to the whole of Europe. The battlefields of the French Wars of Religion to the War of the Spanish Succession are examined in detail, along with the types of cavalry, their equipment and how they performed on the battlefield. 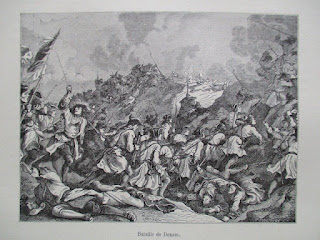 Today's anniversary is this battle from the WSS.  Article in French here
Project WSS Kronoskaf on the battle - this resource is worth supporting in my opinion.
Posted by Ralphus at 07:29 No comments:

Also on Kronoskaf under a different name.

Today's anniversary. Wiki
Posted by Ralphus at 05:46 No comments:

Today's anniversary. The Battle of Assietta was a significant engagement of the War of the Austrian Succession and pitted a numerically superior French force of 25,000-40,000 men[2] under the command of Louis Fouquet, Chevalier de Belle-Isle against a Sardinian army of 15,000 men[2] led by Giovanni Bricherasio. The French were soundly defeated and their commander, Belle-Isle, killed during the course of the battle. 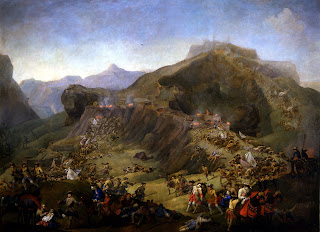 Helion are publishing a book on this battle later this year. Read about it here
Posted by Ralphus at 07:42 No comments:

Today's anniversary is a Swedish victory in the GNW. Wiki

The armies and wars of the Sun King 1643-1715. Volume 4 The War of Spanish Succession, artillery, engineers and Militia 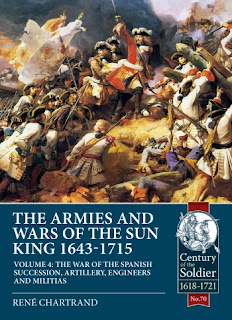 The fourth and final volume and in my opinion the best as it covers aspects rarely covered in military histories. Well illustrated it is an excellent series that will soon become the classic work on the subject.

The volume deals with how the military state functioned. Various Militias are featured and their roles. Local reserve troops, armed constabularies are featured as well as recruiting and conscription. Light troops are covered and there are useful appendices on the Allied Spanish army and Portugal's army. There are good sections on the 'Wake of the army' - soldiers' families - and a chapter on caring for the body and soul of the army.

The format of the series has the first part a rolling history of the campaigns of Louis' armies. This volume deals with the early eighteenth century starting with the Camisards and taking in campaigns of the War of Spanish Succession in the Iberian peninsula, Danube, Flanders, Germany and more. Chartrand notes that the War of Spanish Succession was the largest conflict since the Thirty years war and would not be surpassed until the Napoleonic wars.

The French engineers in this age were considered the best in the world so it is crucial to the understanding the French military of this time.  There is also a great chapter Guns and Gunners which investigates the various artillery formations and their uniforms. An interesting section is the Economic tremors of war and it examines the economic burden of the army. This was very interesting in particular because it was the tremendous costs that made England abandon the fray in the years that followed her famous victories. As Mr Chartrand comments sometimes war is not always decided on the battlefield.

A classic series which I recommend heartily 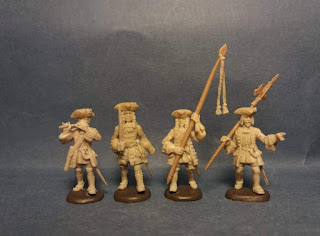 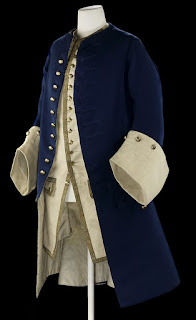 Today's anniversary is a battle near Devizes Wiltshire. Details

Picture is by Graham Turner Roundway Down - prints and details here 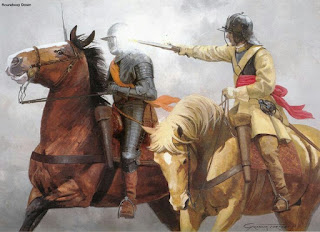 The 1691 Battle of Aughrim was a key battle in Irish military history — the decisive battle of the Williamite War in Ireland. The Battle of Aughrim Visitor Centre in Co. Galway brings the battle to life through immersive activities, interactive experiences, an audiovisual exhibition, a battlefield diorama and a thrilling video telling the story of the battle.

This is one of Ireland’s finest tourist attractions! Come and discover the battle for yourself in Ireland's Hidden Heartlands. For more information and details of how to book, visit the centre's website: https://heritage.galwaycommunityherit...
Posted by Ralphus at 07:10 1 comment:

Today's anniversary. The decisive engagement of the War in Ireland. Wiki 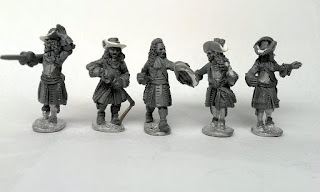 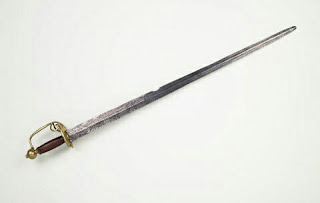 Regimental Drummers and their important role within the army...

Devereux's regiment have made a video that covers this topic. Here

Here for more photos and details. Military swords of this era are rare so I was chuffed to find this. 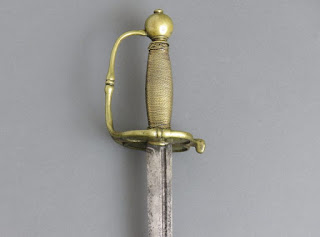 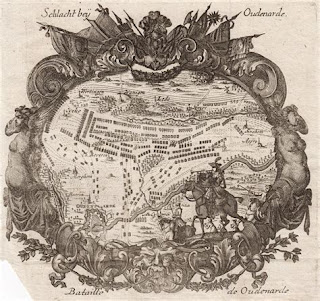 Today's anniversary is another Somerset battle this time with the New Model Army facing off Lord Goring. 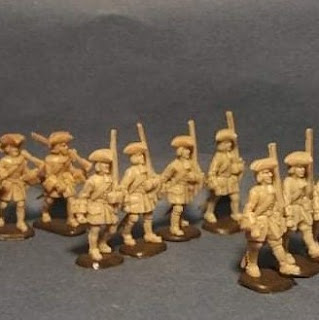 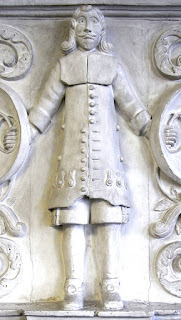 Anniversary today of a battle local to me being near Bath. Wiki

Good blog article on the battle


Today's anniversary. Wiki
Posted by Ralphus at 02:11 No comments: