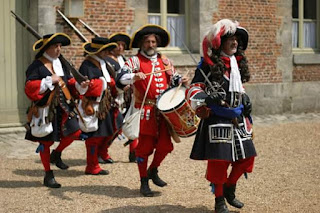 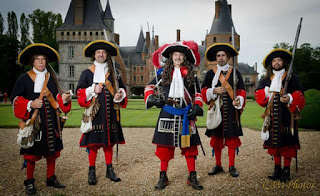 This group are one of the best early late seventeenth century groups. Here is their Facebook contact pages. Inspirational work chaps!
Posted by Ralphus at 12:49 No comments:

Thanks to Anno Domini 1672 for this link to uniform plates depicting the Dutch army of the 1670s. They are purportedly from originals but caution is advised. I like them. 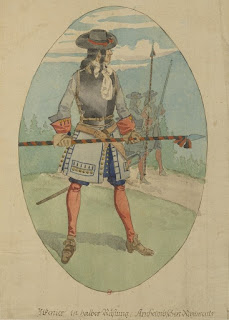 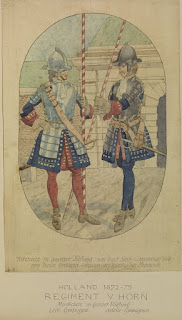 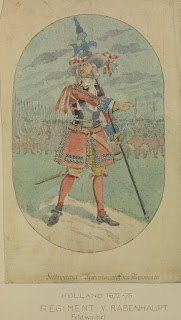 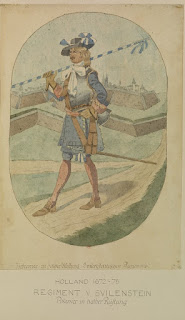 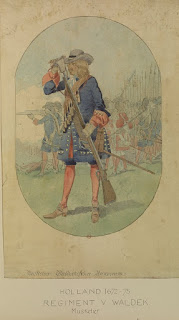 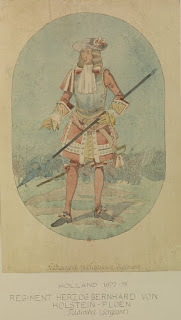 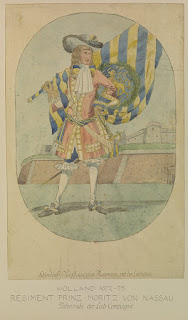 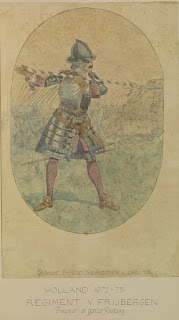 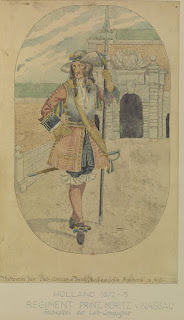 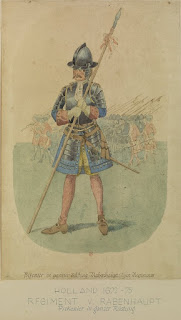 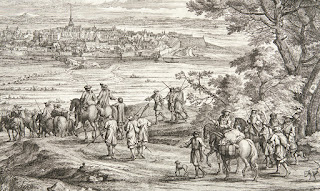 Thought I'd post something from around the time of Landguard and this popped up. French soldiers of about then. 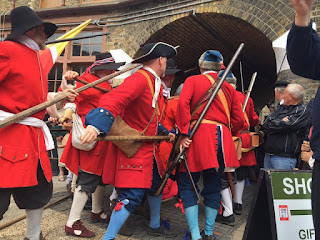 The Battle of Landguard Fort or the Attack on Landguard Fort was a battle towards the end of the Second Anglo-Dutch War on 2 July 1667 where a Dutch force attacked Landguard Fort near Felixstowe. It was intended to clear the way for an attack on the English Royal naval anchorage at Harwich. After repeated attempts the Dutch attack planned by Michiel de Ruyter was repelled and as a result the planned attack on Harwich was abandoned. It was one of the last battles of the war in Europe before the Treaty of Breda was signed.[2]
WIKI 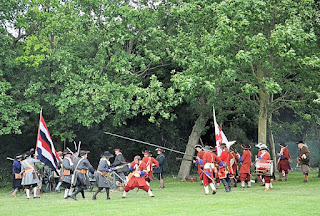 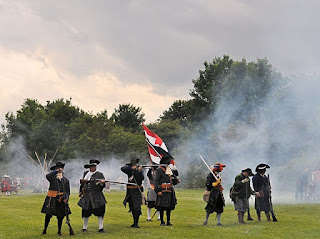 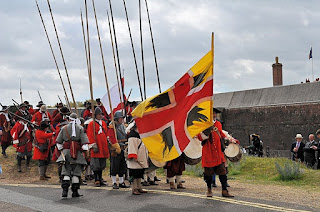 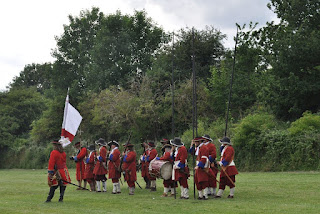 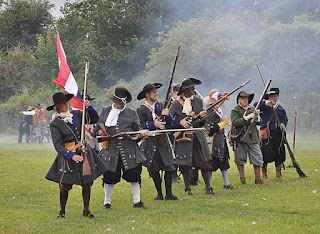 Photos from Felixstowe Museum
Posted by Ralphus at 08:50 1 comment: 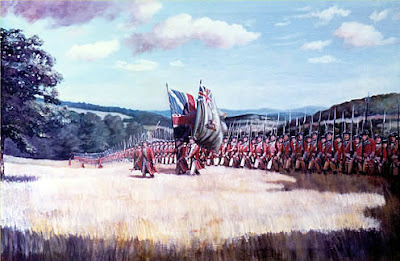 From here
Archduke Ferdinand of Brunswick, the commander of the Allied forces in Germany, attacked the French army commanded by Prince Soubise and the Duc D’Estrées, which had taken up a position to the north of Kassel, with its headquarters at Wilhelmstahl. The country is hilly and enclosed, and heavily wooded.
On the morning of 24th June 1762, the Hanoverian troops under Spörcke and Lückner attacked from the north-east, while Ferdinand himself advanced from the north upon the main French army under Stainville. The French were being pushed back, when, to their complete surprise, the British troops which had advanced from the south-west under the Marquis of Granby deployed into line and attacked them unexpectedly on their left rear. Stainville’s troops faced about to meet this new threat, and the Grenadiers de France, the Royal Grenadiers and the Regiment of Aquitaine fought hard to try and drive the British back down the hill. There was much fighting in the woods. With Ferdinand’s German troops pressing from the other direction, Stainville’s corps broke.
3,000 prisoners were taken, many of them by the 5th Foot, which was awarded the battle-honour ‘Wilhelmstahl’ (in 1836). Stainville himself escaped with the remnants of his force, just two battalions, and the fugitives of the French army streamed away towards their base at Kassel.
Posted by Ralphus at 08:10 No comments: 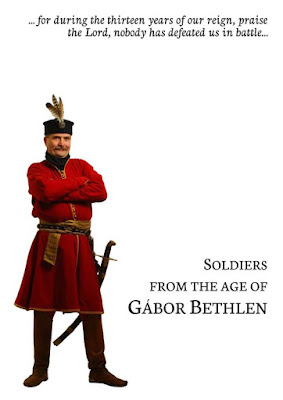 Published!
We are proud to launch the English edition of our e-book that was published in 2013 for the 400th anniversary of the reign of Gábor Bethlen. He was succesful as a leader uniting peoples, a patron of the arts, a politician and also as a general in the tumultuous seventeenth century Europe. This book introduces the same topics which we focus on as reenactors. We hope it will be a useful addition for our foreign reenactor friends to study the 17th century Hungarian political and military history.
Free download here:
http://katonak-bethlen-gabor-korabol.hu/…/Soldiers_from_the…
Posted by Ralphus at 11:18 No comments: 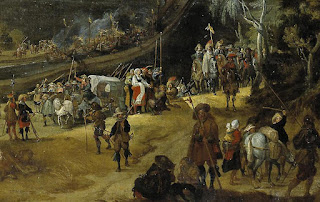 Interesting blog - check it out 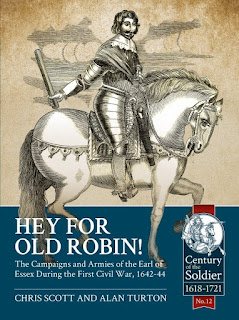 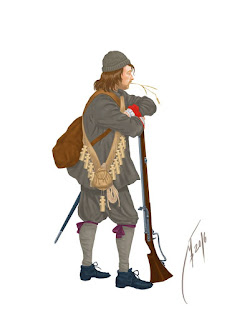 PUBLISHED TODAY
HEY FOR OLD ROBIN! THE CAMPAIGNS AND ARMIES OF THE EARL OF ESSEX DURING THE FIRST CIVIL WAR, 1642-44
‘Hey For Old Robin!’ was the cry of the Earl of Essex’s army during the First Civil War as, contrary to modern popular belief, Robert Devereux was well-liked by the men he led. This book fills a gap in the literature of the Civil Wars, taking up the challenge to write a new history of Essex and his Army and examining the often-repeated view that he was a cautious dullard with little military skill. The two authors Christopher Scott and Alan Turton, both well known published military historians, present a more balanced view of Parliament’s first Lord General, bringing him out of the shadow of Cromwell. In doing so they are not afraid to bite the bullet of period and modern criticism of Essex as a strategist and tactician, as well as his reported failings as a man. Based on primary research, including site visits to scenes of his triumphs and disasters, they trace the story of the early campaigns, beginning with Edgehill, then Brentford and Turnham Green, the relief of Gloucester and the retreat to Newbury, the Siege of Reading, the Thames Valley Campaign, the disaster of Lostwithiel and the rebuilding of the army for Second Newbury. Whilst they leave the detailed examination of the various battles fought by Essex and his men to more specialist books, they tell the story of each of the campaigns and share their thoughts on Essex’s problems and his decisions and actions. They also examine how the armies were constituted, officered, recruited and maintained, as well as its reductions and transfers. In separate chapters they describe Essex’s Foot, the Horse, the Dragoons, The Artillery and The Train, dealing with what the army wore, what it was paid, what weapons it used, the flags it carried and how it was organised, operated and fought. All this is set within a sound understanding and appreciation of the background of the seventeenth century and Essex’s place in the socio-political zeitgeist as well as period military thinking and practice. Illustrated with a wealth of seldom-seen contemporary engravings of Essex’s officers and friends and newly commissioned maps, as well as uniform and cornets & colours plates, this work is of great use to anyone with an interest in our civil wars including academics, local historians, re-enactors and wargamers. 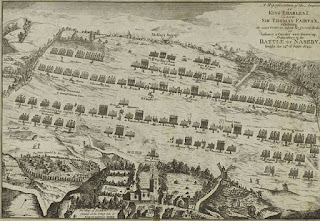 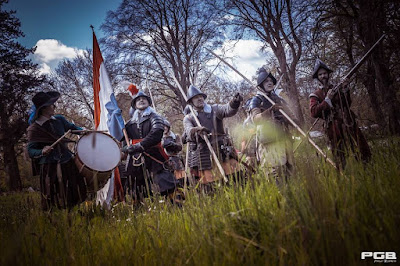 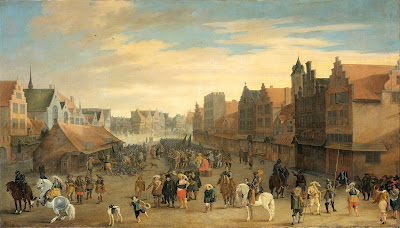 Translated The guards are dropped off at the Neude in Utrecht by Prince Maurits, July 31, 1618
Wiki on the artist
I have to thank Mark Allen for finding this. There is a great deal going on in ths painting it's really worth pumping it up full size.
Posted by Ralphus at 06:15 No comments: