I know that I am more pedantic about this than my cohorts here at The Wars of Louis Quatorze (my family says anal). We have, at last count, 216 "known" followers of this blog, and some unknown quantity of casual readers or those who remain "anonymous" to us. We generally impose no "rules" upon our followers or readers, as to try would be a bit silly. But please, in the interest of making new acquaintances and forming new friendships, sign your comments. I realize that Google Blogger allows for "anonymous" comments, in part so that those without user accounts may still comment. But just as a courtesy, as you would in normal face-to-face conversation, please at least sign your comment with some type of name so that we may come to know you.

If you don't wish to sign as "John Q. Public", then at least John, Johnny, Joe, JQ Public, or something. I sign all of my posts (and usually my comments as well) with my given name of Bill, even though my Blogger identity and nom de plume on the internet is Sir William the Aged. I usually withhold my actual last name (although many know it) for professional reasons, as I do computer-based consulting and these folks sometimes run searches as part of their background checks. Another blogger, known primarily as Der Alte Fritz, has usually followed the same practice for much the same reasons; but he will usually answer to "Jim". 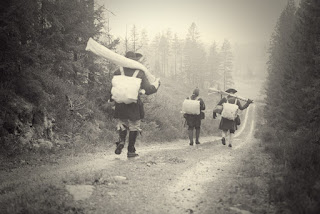 Blog piece on a 1700s trek Some excellent photos on this bit of experimental archaeology.
Posted by Ralphus at 08:47 No comments:

Following on the post from Bill here's the image I think Steve Saleh used for his personality figure.
Posted by Ralphus at 02:27 9 comments:


Following on to Ralphus' last post on this range, and for those that may have missed it on TMP, Nick at North Star has announced that sculptor Steve Saleh has been very busy of late.

The photo captions are self-explanatory, with the possible exception of the personality figures of Monmouth and Churchill. I commented to Nick that the appearance of young Mr. Churchill was a bit "dodgy", as it doesn't conform to his uniform with the Lord High Admiral's regiment or the French-issued uniforms he would have worn with either the 2nd Battalion of the Royal English regiment or the later French Royale Anglais. Nick has responded that he agrees, in principle, but that Steve based the sculpt on a sketch of young John in one the many biographies. With his reminder, I vaguely remember the sketch, but can't place the book; I'll have to dig through my collection. At any rate, Nick felt that it would be a unique and interesting sculpt to add to the range, which I can't disagree with, and that there were already plenty of officer and ensign castings that could work for Mr. Churchill in proper uniform.

The Armored Cavalry Command appear excellent. The Cavalry in breastplate are very good for what they are, namely Maritime Alliance English, Dutch or Germans. I would hope that Steve and Nick would turn their attention to some proper Austrian or Imperial Cuirassier for the Rhineland Campaign and the Italian Campaign, as these would be very useful figures. He could base the sculpts on these illustrations as a starter: 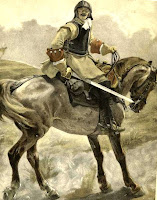 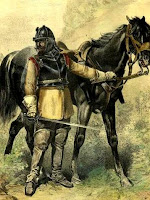 The distinctive Austrian helmet with the adjustable nasal would be nice to see, as would the full back & breast. Hint, hint Nick and Steve, Christmas is coming you know!

Bill
Posted by Sir William the Aged at 21:12 No comments: 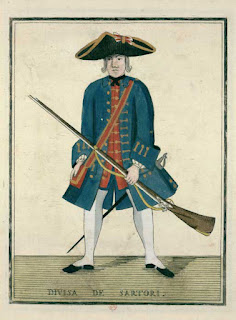 Thanks to Boris for finding this mid 18thc drillbook.
Posted by Ralphus at 09:23 1 comment: