Dutch infantry from the Royal Collection 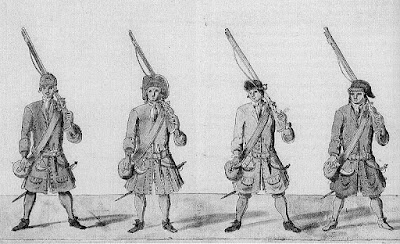 from here
thanks to Wienand Drenth for finding this.

A drawing of four soldiers, facing front, similarly clad in brownish-grey coats, cuffs and woollen stockings, but with different hats. They all bear their guns on their shoulders. Inscribed, verso: A. Van Everding / 10 Novr 1777. The old attribution to Allart van Everdingen was based on the inscription on the verso, however the soldiers' equipment indicates that the drawing was executed after his death in 1675, and probably dates from the early years of the eighteenth century.
Posted by Ralphus at 01:32 No comments: 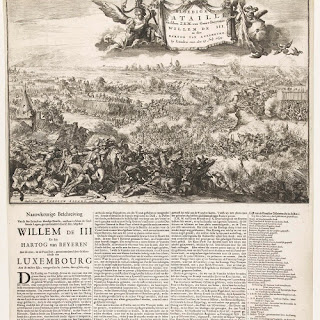 Todays anniversary - wiki here
Posted by Ralphus at 06:05 No comments:

Soldiers of Killiecrankie - a lovely day out in Perthshire

Nice write-up from Barry Hilton
Posted by Ralphus at 05:49 No comments: 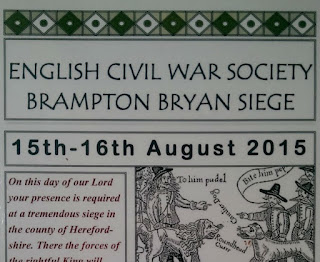 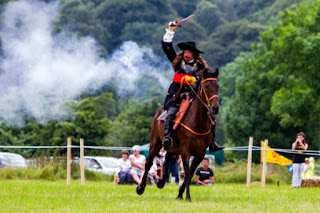 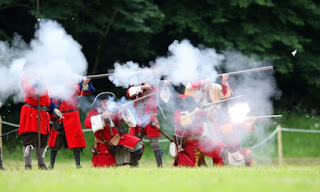 Well done to all those who took part - more photos here
and here at the event FB page
Posted by Ralphus at 09:53 No comments: 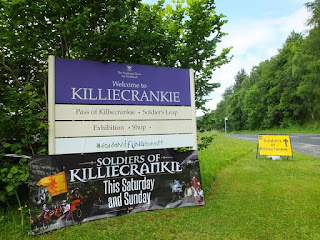 This weekend in Scotland there is an event 'Soldiers of Killiecrankie. If you are in the area why not visit?
Posted by Ralphus at 04:59 1 comment:

SCOTS ARMIES OF THE GREAT REBELLION

NEW from Partizan Press SCOTS ARMIES OF THE GREAT REBELLION by Stuart Reid, £29.50
Posted by Ralphus at 13:04 1 comment: 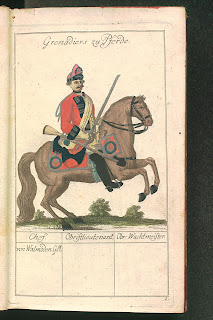 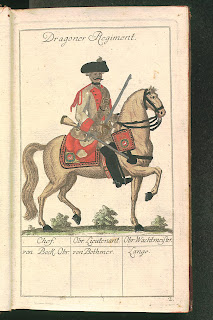 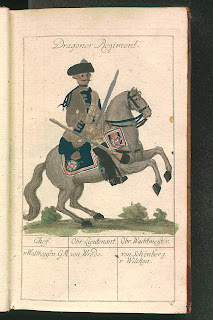 Pike and shot on the march 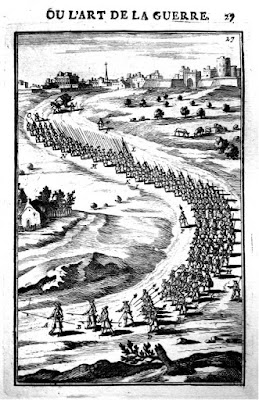 A M Mallet Travaux de Mars
Posted by Ralphus at 08:10 No comments: 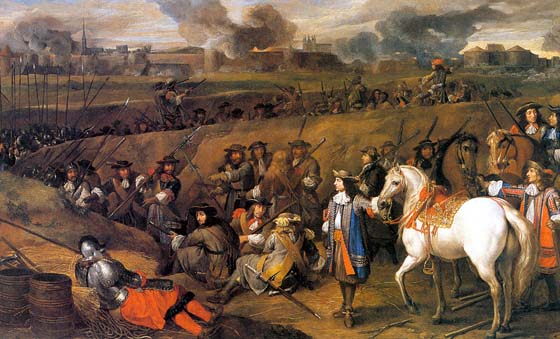 Louis XIV Visiting a Trench During the Siege of Tournai in 1667.
Posted by Ralphus at 09:42 No comments: 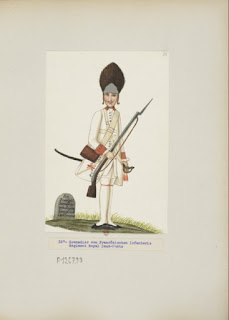 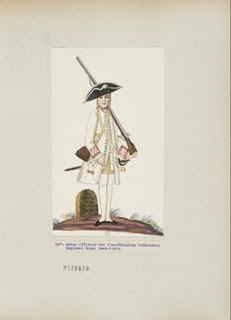 From the Wiki
The Régiment Royal Deux-Ponts, (Zweibrücken/Two Bridges) was a German-French infantry regiment created under the Ancien Regime in 1757. The regiment was raised on 1 April 1757 by the duc de Deux-Ponts (Herzogtum Zweibrücken) in his estates as well as in Alsatian bailiwicks. This family owned the Petite-Pierre county, the bailiwicks of Bischwiller, Guttemberg, Seltz and Hagenbach. Outside France, it also owned the bailiwicks of Neucastel, Barbelroth, Cleeburg and Weylenbourg in Alsace.
The regiment initially counted 2 battalions but was soon increased to 3 battalions. In February 1758, the regiment was increased to 4 battalions. On January 18, 1760, when the German Infantry was reorganised, the regiment was reduced to its original strength.
It was commanded by Baron de Clozen in 1758 and from February 20, 1761 to February 21, 1765 by Baron de Scheidt .
Read more on the Project Seven Years War page on the unit
Posted by Ralphus at 09:10 No comments:

This handsome matchlock would be ideal for the Monmouth Rebellion. Just saying....
available from Derbyshire Arms
Posted by Ralphus at 06:17 No comments:

here
Posted by Ralphus at 07:49 No comments:

"The First Colonial Soldiers. A survey of British overseas territories and their garrisons, 1650-1714". It comes in two volumes:
Volume 1: the British Isles, Europe, Asia and Africa
Volume 2: the Americas and the Caribbean
More info: http://drenthpublishing.nl/colonialso…/colonialsoldiers.html

Drenth Publishing ~ Colonial soldiers 1650 - 1714
volume 1 with an introduction by Professor John Childs 352 pages, with an index of officers and over fifty illustations and maps
drenthpublishing.nl
Posted by Ralphus at 05:06 3 comments: 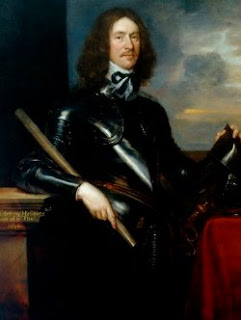 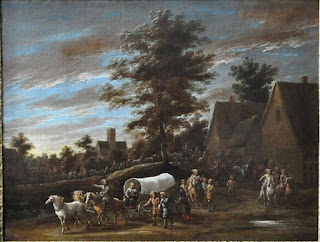 This scene reminds me of a scene from the Monmouth Rebellion but then it would wouldn't it? 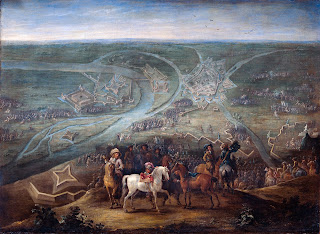 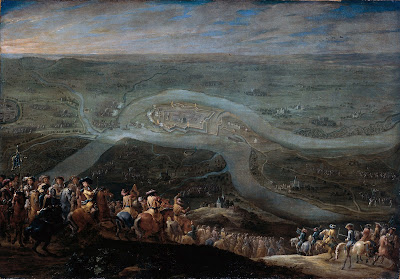 What I am reading at the moment

Captain Henry Herbert's narrative of his journey through France with his regiment, 1671-3
and, Ane account of our regements marches from the winter quarters to ther entrance in France by Henry Herbert Published in 1990, Royal Historical Society (London)
Herbert was a troop commander in Sir Henry Jones's Regiment of Light Horse, aka
the English Regiment of Volunteer Light Horse - a 505 strong regiment - the colonelcy of which transferred to the Duke of Monmouth in 1673 on Jones' death at Monmouth's side in the action around the half-moon at Maastricht.
Posted by Ralphus at 06:20 No comments:

A new blog from Irish illustrator Seany - interesting - shows how an Osprey is developed.
Posted by Ralphus at 06:17 No comments: 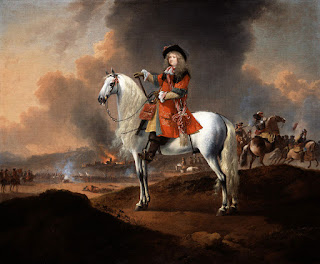 Oil on canvas by Jan Wyck (1645 (c)-1700), 1672 (c).
In one of the earliest colour representations of a regimental uniform of King Charles II's Standing Army, Colonel Egerton wears the uniform of an officer of the King's Troop of Horse Guards (later the Life Guards).
Egerton fought on the Royalist side in the Civil Wars of Britain (1639-1651), commanding his own regiment of horse. A captain at the Battle of Edgehill in 1642, he rapidly gained promotion and by 1645 he was a major-general. The following year he surrendered Ludlow Garrison to a Parliamentary force and was later implicated in various royalist conspiracies for which he was sent briefly to the Tower of London.
After the Restoration of the monarchy in 1660, Egerton became lieutenant and lieutenant-colonel in the 1st King's Troop of Horse Guards. In 1666, he raised one of eight troops of 'Select Militia' under the Duke of Richmond. From 1661 to 1679, he was also the Member of Parliament for Staffordshire.
The action in the background of this painting is thought to represent a battle from the 3rd Dutch War (1672-1674). Though no evidence survives to confirm that Egerton took part in this campaign, it is probable that he joined the force of 50 men selected from each of the three troops of the Horse Guards who went with many gentlemen volunteers on active service in the Low Countries. Egerton continued to serve with the regiment until his death on 20 October 1681. He is buried in Westminster Abbey.

Royal Dragoons 1685 by The Troop 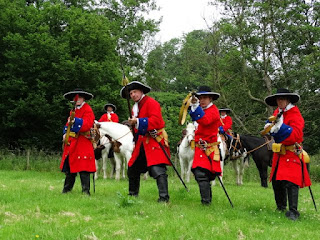 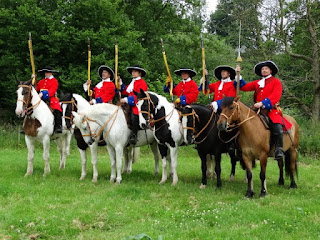 Alan Larsen posted these photos on my Monmouth Rebellion Facebook Group and I had to share with you it being Sedgemoor day and all. He was keen to stress that it is a work in progress but I think you will agree that it is pretty darned good already.
ROYAL REGIMENT OF DRAGOONS - from the wiki
The regiment was first raised as a single troop of veterans of the Parliamentary Army in 1661, shortly thereafter expanded to four troops as the Tangier Horse, taking the name from their service in Tangier.
Three of the four troops of the Tangier's regiment were originally troops in the English Regiment of Light Horse in France attached to the French army of Louis XIV and under the command of Sir Henry Jones. They were constituted in 1672 and after Jones was killed during the siege of Maastricht in 1675, while serving with the Duke of Monmouth, command passed to the Duke. The regiment was recalled to England in 1678 (it was disbanded in France and reformed in England with most of the same officers) with the expectation of fighting in a war against France. In early 1679 it was disbanded and then reformed in June of that year as Gerard's Regiment of Horse (it colonel being Charles Gerard), with most of the same officers and men, to police the Covenanters in Scotland. The regiment was disbanded in late 1679 and three of its captains, John Coy, Thomas Langston and Charles Nedby along with their troopers went out to Tangier in 1680 as reinforcements. When they returned in 1684, they joined the what became a new permanent regiment of the Royal Dragoons.[3]
They were ranked as the 1st Dragoons, the oldest cavalry regiment of the line, in 1674; on their return to England in 1683 the three troops were joined with three newly raised troops and titled The King's Own Royal Regiment of Dragoons, named for Charles II. In 1690 they were renamed as simply The Royal Regiment of Dragoons

'twas the night before Sedgemoor 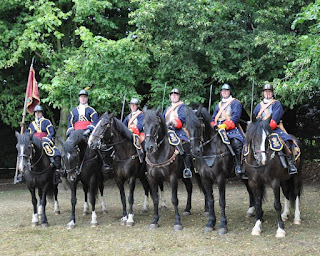 Have relisted it on ebay
Posted by Ralphus at 03:55 No comments: