BBC documentary on the impressive 18th century fort in Scotland. 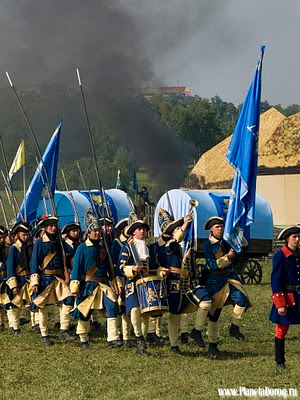 News piece here on a different kind of GNW reenactment.
Posted by Ralphus at 06:59 No comments: 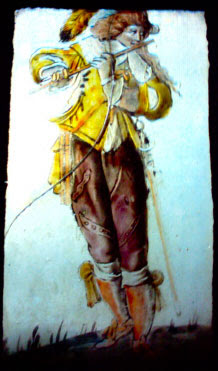 This court composer of Charles I's court was killed today at Rowton Heath in 1645. 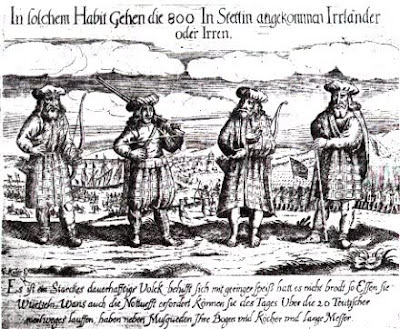 Well, PSR finally got their hands on a set of the "Scots Mercenaries (Thirty Years War)", and the review and photos, sadly, are about what I expected. That the figures are based heavily on the Köler engraving of "Irelanders" arriving at Stettin is obvious, which is why I included that engraving at the top, originally published in 1631. This engraving has long been used by figure manufacturers as justification for depicting TYW Scots in typical Highland dress, whether accurate or not. It's depiction has also been surrounded by controversy for even longer than we have had figures to go with it.

While the engraving may, indeed, accurately depict "Irelanders" (actually Scots Highlanders) as they might have arrived, fresh off the boats, it certainly does not depict them as they served in the Swedish or French armies of the TYW. It has long been shown, from other illustrations, muster rolls and anecdotal sources, that the Scots in Swedish service were uniformed by their employer. So too were the Scots in the French army. In fact, considering just how stereotypical "Highland" these figures are, it's difficult to imagine what they might be used for, except possibly a small Highland contingent in the early ECW, and they're too well armed for that with 20 matchlock muskets to 12 pikes (and 2 of the pikemen are definitely wearing trews and later armor with tassets, back & breast and helmets, while the third appears to have a belted plaid worn with his trews and a bonnet). You do get two archer figures, but with an odd recurve bow instead of the more traditional straight stave Highland longbow.

I'll leave you to read the full review on these on PSR's site, as well as see the pictures, but I fear that once again Mars have taken what could have been a promising set and missed the mark badly. Also, following Mars' recent practice, there are four (4) of each and every figure/pose in the pack, showing once again that Mars knows little (or perhaps cares little) of what the wargamer does with their figures. As always, my opinions only, your mileage may vary. 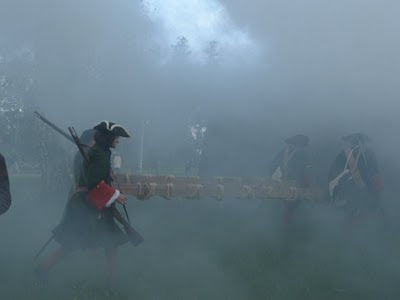 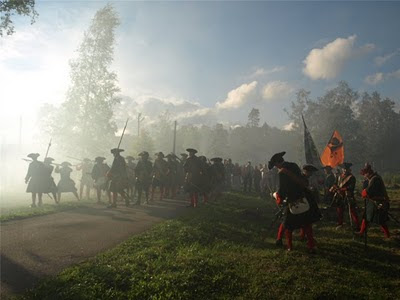 The reenactment of the 300th anniversary of this siege in the Great Northern War went well. Scaling ladders were used and the results look pretty spectacular. There's some great photos here and here
Posted by Ralphus at 05:06 No comments:

Thanks to Uwe from History inn 1/72 for this clip. Imdb here It says: A chronicle of the life of Lope de Vega, the Spanish playwright who dominated Spain's early Golden Age of theater.

I am looking forward to these figures and they look good from the test shots. Check them out
Here
Here
and here
These Prussians are likely to prove popular as Hessians and other German states.
Posted by Ralphus at 00:11 No comments: 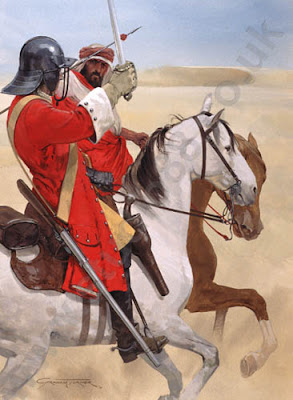 On the subject of Tangiers the original paintings from the Osprey book on Ironsides are available from this gallery.
Posted by Ralphus at 04:27 No comments: 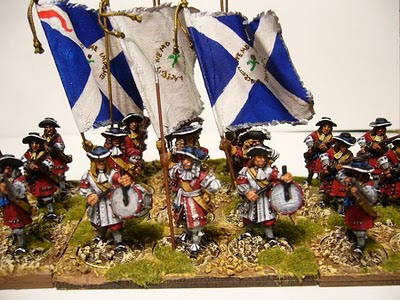 So the mid S0merset wargamers did an excellent Tangiers 1680 battle at Colours with the Glory of the Sun figures. They had to make do with other cavalry as the Glory cavalry are still not out. Made quite an impression from the look of it. Well done. And the club is just down the road from me - maybe I'll have to go visit.
Photos (close ups of the units) at the Captain General's site. Battle in progress pictures.
Posted by Ralphus at 04:17 No comments:

Still in the realm of Anglo-Scottish warfare this battle was fought today in 1547. According to the wiki
It was the last pitched battle to be fought between the Scottish and the English Royal armies and the first "modern" battle to be fought in the British Isles. It resulted in a catastrophic defeat for the Scots caused by the use of naval artillery by the English for the first time in a land battle in Britain. In Scotland, it was known as Black Saturday.[5]
Posted by Ralphus at 01:44 No comments:

Fought today between the English and Scots in the era of Henry VIII. The last battle to be won by the longbow it will presumably be celebrated in 2013 so it might be worth checking it out. Here's part one of a six part documentary on the battle.
Posted by Ralphus at 01:43 No comments: 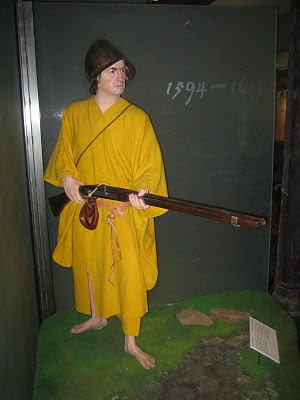 At least that's what I think it is - thanks to Uwe for sending it in - it's from the Dublin museum.
Posted by Ralphus at 10:50 4 comments:

The Reivers - Making of the Borders

Wiki on Border Reivers. From Ireland to Scotland in one hop - same sort of era though. Check out this site for an excellent group The Borderers. 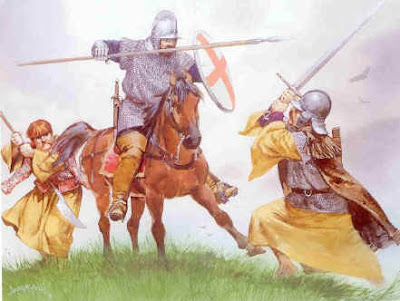 This is a period I know nothing about but the below reenactment group have made me curious about this part of Irish history. 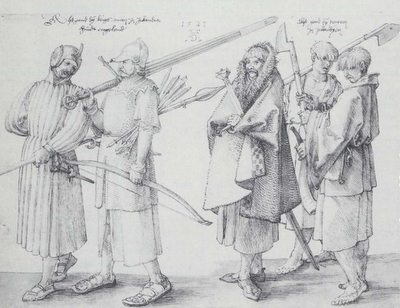 Wiki entry here. It starts with

The gallowglass were a mercenary warrior elite among Gaelic-Norse clans residing in the Western Isles of Scotland (or Hebrides) and Scottish Highlands from the mid 13th century to the end of the 16th century. As Scots, they were Gaels and shared a common origin and heritage with the Irish, but as they had intermarried with the 10th century Norse settlers of the islands and coastal areas of Scotland and the Picts, the Irish called them Gall Gaeil ("foreign Gaels").

They were the mainstay of Scottish and Irish warfare before the advent of gunpowder, and depended upon seasonal service with Irish lords. A military chieftain would often select a gallowglass to serve as his personal aide and bodyguard, because as a foreigner, the gallowglass would be less subject to local feuds and influences. 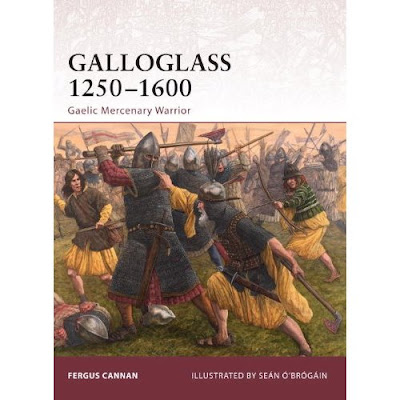 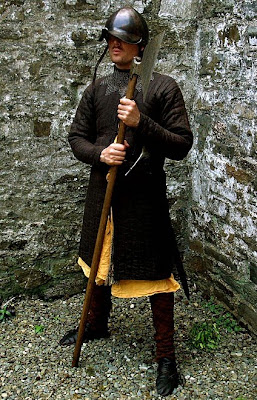 This is a 'new to me' Irish group that specialises in late 15th century early 16th century Gallowglass. They have an excellent blog. It's a very atmospheric period and the photos are excellent. If I lived in Ireland I'd be interested in this. If you want to find out more about these Gaelic mercenaries then check out this book which is illustrated by the very talented Sean O'Brogain.
Posted by Ralphus at 03:27 No comments: 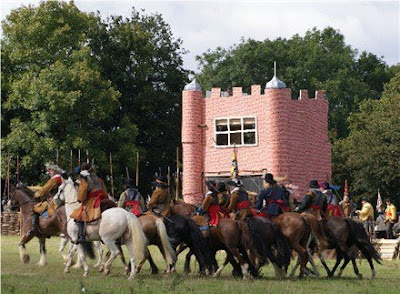 Amazing Basing photos! I wasn't able to go and watch but as a fan of the site I've been following the relaunch of this ECW site with interest. 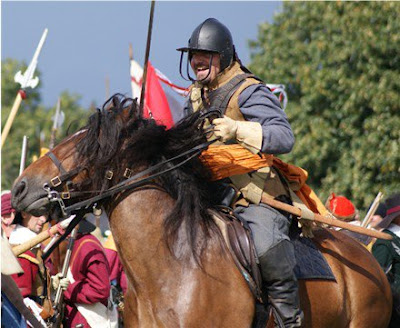 Something to enjoy is this selection of excellent photos of the event by Rowenna Reed.
As you can see they constructed a mock-up of Basing House for the event.
Posted by Ralphus at 00:48 No comments: