Today in 1718 Charles XII lost his life so to commemorate this and the fact that I am currently reading a really good biography here are a few scenes from a film about him. Someone should make a film about this now - an epic life. 1925 film wiki

The Lion from the North: The Swedish Army during the Thirty Years War Volume 2 1632-48 (Century of the Soldier) Paperback 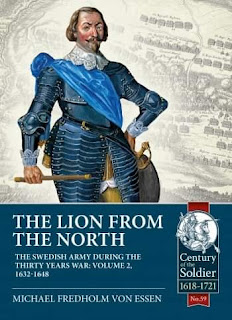 Having got volume one I was looking forward to this volume which deals with the Swedish army after the death of Gustavus Adolphus in 1632. I was not disappointed and found it very useful in understanding the later years of the Thirty years war and beyond. I say and beyond as the scope of this book takes in all of Sweden's campaigns of that era including North America and the Gold Coast. This was a period overseen by Axel Oxenstierna (Lord High Chancellor of Sweden) with a number of able leaders operating in the field. The development of weapons, clothing and tactics are covered in great depth.  There is a large colour section with paintings by Sergey Shamenkov and many photos of flags and standards. There is even a section on the Navy. To conclude this is a very useful study on an area not usually covered and has to be on every 17th century enthusiasts wants list. 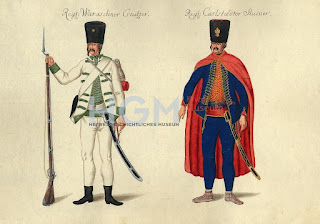 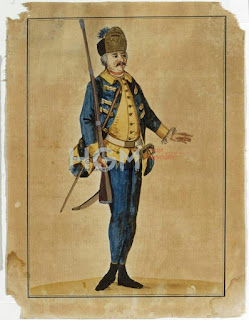 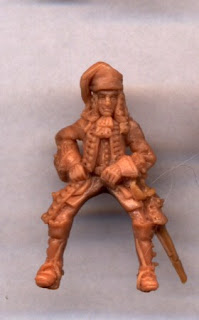 Test shots on the Hat page. Look good. Should be coming out soon.
Posted by Ralphus at 14:51 No comments:

https://youtu.be/S_X6gfCNaME
Erwin Stranka, a native of Kadana in The Czech Republic, studied at FAMU in Prague, but he made his films mainly in what was then East Germany. In 1972 he became a screenwriter and director of a co-production historical comedy, the Czech version of which was contributed by Ludvík Žáček. The narrative takes place during the Seven Years' War and its protagonists are two men: The Prussian King Frederick II (Herwart Grosse) and the thief Käsebier (Manfred Krug). He forces the sly underwater wart to help his army penetrate the gates of besieged Prague. Käsebier, however, eventually takes the side of the city's defenders, led by Maria Theresa's brother-in-law, Karl Lorraine (Josef Kemr), and his wife Anna Marie (Helena Růžičková). The entertaining film, which, of course, ignores the real historical context, has taken as a model french and italian historical comedy.
The film is available here under the license of the National Film Archive and the State Fund of Cinema, respectively.
Posted by Ralphus at 06:49 2 comments:

Meanwhile in the Ukraine 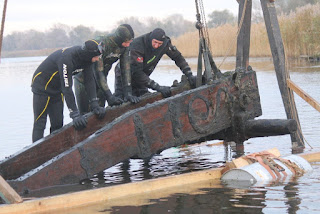 A unique find in Ukraine - the preserved carriage of the field or siege cannon of the XVIII century - raised from the waters of the Dnieper near Khortytsya island. News article
Posted by Ralphus at 03:12 2 comments:

Something that may be of interest 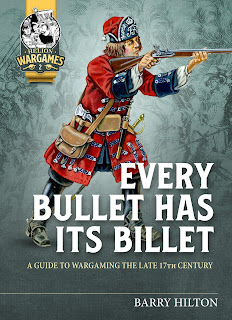 EVERY BULLET HAS ITS BILLET

A Guide to Wargaming the Late 17th Century
https://www.helion.co.uk/.../every-bullet-has-its-billet...
Posted by Ralphus at 16:05 1 comment:

A Taste of Victory 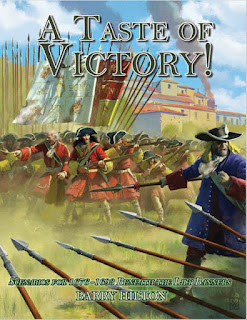 Thanks to Scott for the heads up. Details here
Posted by Ralphus at 14:03 No comments: 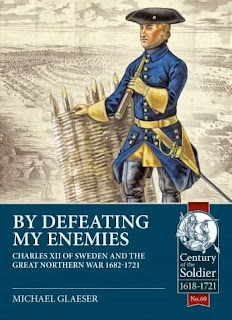 We are pleased to announce that 'By Defeating My Enemies. Charles XII of Sweden and the Great Northern War 1682-1721' is now available to buy on the Helion and Company Publishing website. 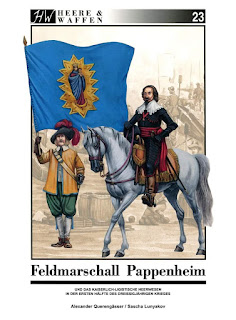 Another casualty of Luetzen was of course Pappenheim. This book looks interesting. Anybody read it? My German is poor. Details 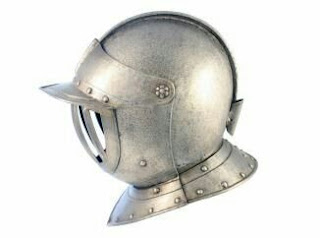 Read about the Prussian Horse Artillery here at Kronoskaf.
Posted by Ralphus at 11:24 No comments: 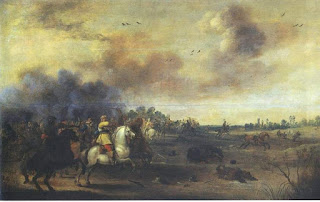 Today's anniversary. Wiki
Posted by Ralphus at 02:53 No comments:

Thanks to Rob for the heads up that it is also this anniversary too.
Posted by Ralphus at 05:07 No comments: 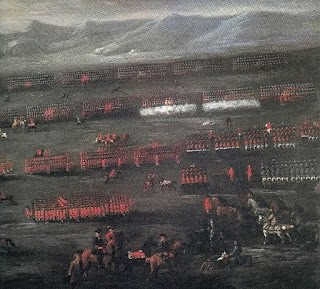 Today's anniversary. Wiki
Posted by Ralphus at 03:04 No comments:

The Army of George II out now 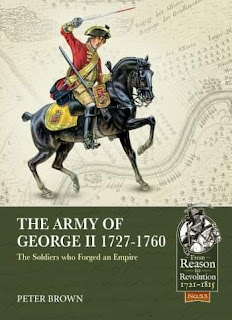 'We are pleased to announce the release of The Army of George II 1727-1760: The Soldiers who Forged an Empire.
This book is a one-stop-shop for the British Army during the era of the War of the Austrian Succession and the Seven Years War. Chapters deal with organisation, recruitment, health care, and the experience of service at home, in Europe, in North America, and in the farthest reaches of 18th century Britain's growing empire. As the author makes plain throughout, his focus is on the soldiers who made Britain's eventual triumphs of the 1750s and 1760s possible, but the book also takes in the high command, tactics, equipment, and the conduct of battle. Appendices provide details of uniforms, lace, and facings. As well as a large number of black-and-white illustrations, 16 pages of colour are filled with specially commissioned plates by Patrice Courcelle as well as living history recreations of uniforms of the period.'
Buy it here: https://www.helion.co.uk/.../the-army-of-george-ii-1727... 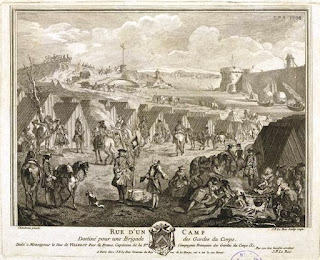 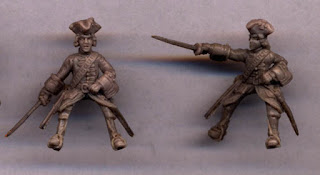 More here at Strelets-r.
Posted by Ralphus at 11:17 No comments:

Reconstruction of the Battle of White Mountain (Bílá hora 1620)

Hundreds of history enthusiasts from around Europe took part in the reconstruction of the Battle of White Mountain (1620) at Bila Hora in Prague on September 21st. The event commemorated one of the turning points in the history of the Czech lands. Although the battle lasted for only two hours, it had far-reaching consequences. The Bohemian uprising was crushed by the Habsburgs and those who had taken part in the revolt were punished. The following year 27 noblemen were executed on Old Town Square, tens of thousands went into exile.

White Mountain/Bila Hora 400th. Today (8th) is the anniversary of this epic though short battle. It only lasted 2 hours. 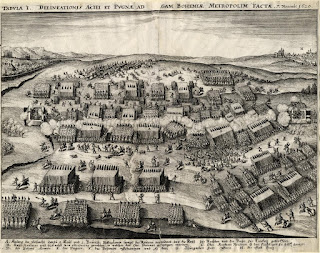 The wait is almost over. They say on their Facebook page

The intial 11 packs of our new range of 15mm English Civil War figures are soon to be released!

We have aimed to pack into this range as much detail as 28mm figures.
The miniatures are currently at the mouldmaker being done, The Kickstarter will be sent out first but we have opportunity to add to the main stock order so that we can send out other customers orders straight after and hopefully before the holiday season.
Simon will be putting these on the website in the next few days so you can put in pre orders if you wish, we anticipate that these figures will be sold out quick and we have put in a guess of how much stock to order.
We will be adding to this range more packs soon including artillery, we hope to make this the most comprehensive ECW range on the market over the next year. 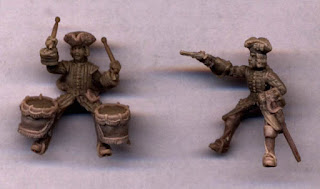 More Here
Posted by Ralphus at 03:53 No comments: 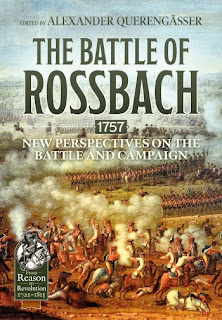 Register interest
On 5 November 1757, in the vicinity of the small Saxon village of Rossbach, Frederick the Great and his army achieved a spectacular victory over an enemy composed of French and Imperial troops. 22,000 Prussian soldiers drove an army twice their size from the field of battle. Neither before or after would the Prussian king achieve such a decisive victory at so little cost to his own forces. Following the battle the French did not actively participate in any further campaigns against Prussia, whilst the Reichsarmee’s reputation was permanently damaged. In contrast Frederick’s generalship assumed a new lustre after the difficulties he had experienced during the summer campaign in Bohemia. The present volume brings together essays by well-known authors who examine the battle from differing perspectives. These include analyses of the three armies involved, and discussion of the course of the battle, its effects on the surrounding civilian population, and forms of remembrance. The volume is illustrated with a number of attractive images and maps.

Today's anniversary - William of Orange lands at Torbay in 1688 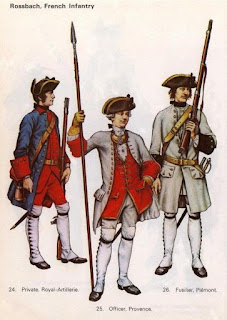 Today's anniversary. The great Prussian victory. Kronoskaf
Posted by Ralphus at 02:16 No comments:

A wooden snuffer figure in the shape of the Grenadier Brandenburg Infantry Regiment of Leopold Anhalt-Dessau. 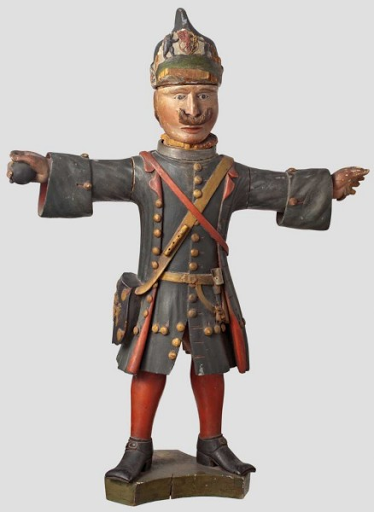 Similar to this one

I hope you have your lockdown painting sorted out. I have been stocking up on paints from my local model shop. I have some Strelets-r WSS to do. I like to support the local shops and in particular model shops as we would miss them if they were to go.

This is my local shop Signals. Mainly aimed at the Railway modeller it has much useful stuff including fantasy which I don't like but I know people do. If I want a shop that sells military figures then Frome about 8 miles away has a very good place called Frome Model Centre . Boasts being the largest model shop in the South West which I can believe - its huge. Funnily enough the shop used to be the home of Frome Wargames club in the early 70s which I used to frequent. It was upstairs on a  table tennis table.  But I digress. 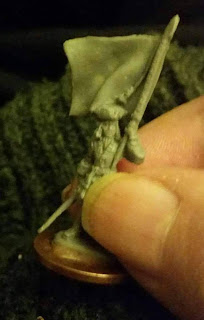