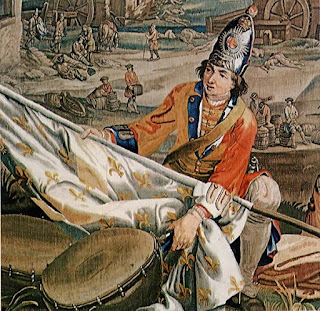 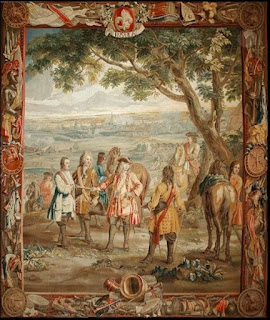 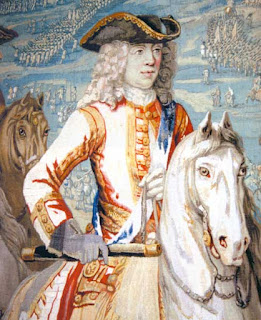 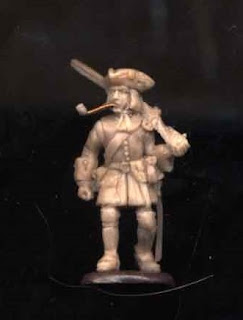 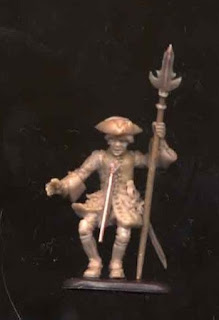 Lost Children (Czech: Ztracenci) is a 1956 Czechoslovak historical drama anti-war film directed by Miloš Makovec and based on Jiří Brdečka's adaptation of a short story by Alois Jirásek. The film was screened in the main competition section of the 1957 Cannes Film Festival. Wiki where there is plot etc. 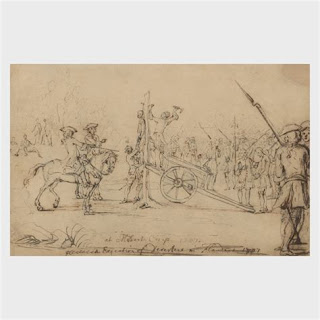 This is one of the very few depictions of a Marlburian soldier. It is by Laroon the younger.  He joined the army in 1707 and was in many theatres.

Ink on paper, 1707, titled and dated at bottom, with label from the Paul Mellon Foundation for British Art, London. 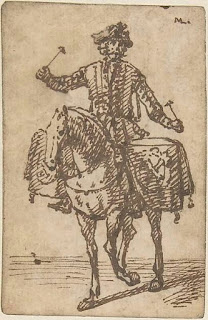 Wiki on Laroon (the elder) 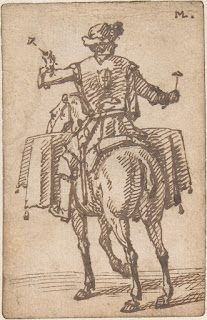 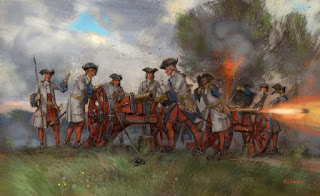 They are doing great box art at the moment. See the figures here
Posted by Ralphus at 02:07 No comments:

Now Munmouth had in his Army 300 Sithers, armd with Sithes, pistols sticking in at their Girdles, and brod sords, in wast belts,63 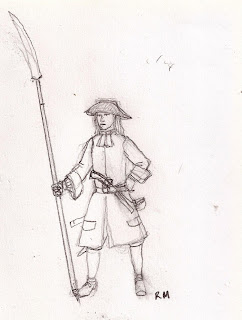 By Ralph Mitchard. Taylor's account here
Some reference to the scythemen from
http://static.cambridge.org/content/id/urn:cambridge.org:id:article:S0003581519000143/resource/name/S0003581519000143supp001.pdf
Thus this Rebellion was by the Great Jehovah over throwne and brought to nothing, and here ’twill not be unnecessary to give you a description of the Strang, and Unheard of Wepon, which Mounmouth had in his Army, those Sithes, which were thus: these Sithes were about fower foot Long, and fower inches brod, and one Inch thick at the back, and were place into Strong Stafs about ten feet long, of good supple Ash, about 1½ Inch Diameter, in the Lowerward they were bound with a ferul [ferule] and had a sharp spike, about 9 inches long, in all respects as you see in the figure of these Sithemen here hee had 300 men, which were the Tallest and Lustyest men they could prick out, they were ranged in the front of the Infantry, and Comanded by Count Horn; these Sithers maintaind their Ground Stoutly to the last, against the Kings horse, for indeed these Sithes was a desperat Wepon, loping off at one Stroak, either head, or Arm, and I saw a man layinge among the dead, whose back was clove down, by one struck+of
now that their orders was to cutt of the bridle arm, thereby the disable th riders, and defend themselfs, the which they to the last stoutely did these Sithes, and a horse whose head at one strock, was almost separated from his body. These Sithes with abundance more of Mounmouth’s other Arms were brought Up to London, and laid up in the Armory of the Tower of London.
Posted by Ralphus at 12:36 No comments: 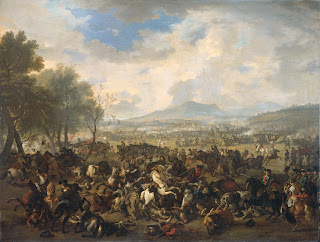 Today's anniversary. Wiki
Posted by Ralphus at 03:18 No comments:

Thanks to Benerson Little for this


JOHN TAYLOR’S ACCOUNT OF MONMOUTH’S  REBELLION AND THE BATTLE OF SEDGEMOOR,  6 JULY 1685 edited by John Childs

John Taylor, a mathematics teacher, enrolled as a gentleman volunteer in the newly-created Queen Consort’s Regiment of Horse on 20 June 1685. Five days later, the unit left London to reinforce the Earl of Feversham’s corps which was operating in Somerset against the Duke of Monmouth’s insurrection. Between 1688 and 1689, Taylor recorded his martial experiences in pp 81–97 of ‘Taylor’s History of His Life and Travels’ (National Library of Jamaica, Kingston, MS 105). This is transcribed below, extensively annotated. Although too late to experience action, Taylor spoke to combatants and visited the Sedgemoor battlefield on 6 or 7 July. This previously unnoticed narrative provides additional detail and some new perspectives on, inter alia, the internal organisation of the rival forces; the identification of Anton Buys; the social activities of royal infantry officers on the night of Sedgemoor; the impact of alcoholic intoxication upon the battle; the tactical roles, equipment, and articulation of Monmouth’s scythemen; and the importance of Tangier veterans. 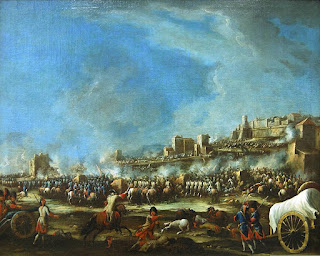 In 1734, during the War of Polish Succession, the Spanish army under Charles of Bourbon and the Duke of Montemar defeated the Austrians under Giuseppe Antonio, Prince of Belmonte at the Battle of Bitonto, thus securing possession of the Kingdom of Naples for the Bourbons. 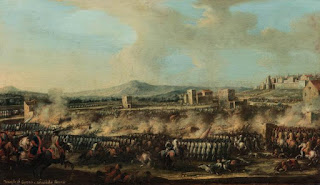 Today's anniversary is this terrible event that goes down as one of the worst atrocities of the Thirty Years War. Wiki

The below clip is from Alatriste which is a depiction of the battle.

Thanks to Andrey for this. Lutter 1626 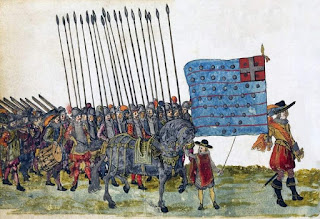 Mark has quite a collection of 1685 miniatures mostly from Front Rank. The purple lined red coat is in the line of new research in Steve Carter's book Fighting for Liberty. He quoted in the book 'Mr Hewling, the son of Benjamin Hewling mercht. In Colman Street went from Utrecht on Thursday morning for Amsterdam. It is he who tooke care of the making the purple coats, lined with red, for the souldiers that shall be imployed in the Rebells service.' 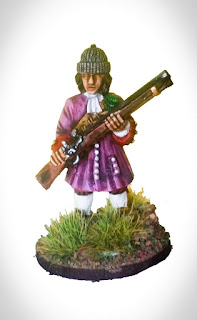 This was of great interest to us Monmouth rebel fans as we thought it was red lined purple. Coats with purple cuffs were made and worn though I believe Monmouth was described as wearing a purple coat during the Rebellion. 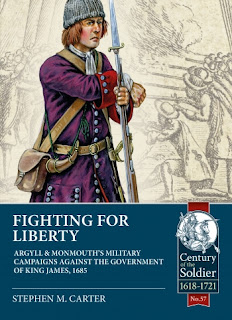 Anyway nice to see the latest research appearing in miniature.
Posted by Ralphus at 12:57 1 comment:

Strelets-r have said on their forum that they are doing another 11 sets for their War of Spanish Succession range. http://www.strelets-r.com 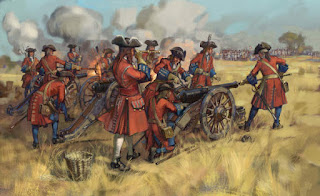 Music from the Thirty Years' War

Painting by Carl Friedrich Lessing: The Siege (Defense of a Church Courtyard During the Thirty Years War)
Posted by Ralphus at 12:23 No comments:

This is a fascinating read that should be of interest to anyone interested in the Parliamentary forces of the British Civil Wars and their deployment on the international stage.

The first part deals with the diplomacy and foreign policy decisions that led to the largest force to date to leave the English shores. The next chapter deals with the various mostly infantry regiments in the army.  Under Robert Venables and manned by Civil War veterans the first target was Hispaniola. Primary sources are used throughout to really explore the campaigns from all sides. The next  chapter deals with the Navy. The rest of the book is taken up with the events as they unfolded with letters and testaments to add depth and colour. Barbados was the stepping stone for the attack on Spanish territories. The disasters that follow are explored in depth. Venables in his over-confidence botched the attack on Hispaniola which is examined from all aspects. The next stage was an attack on Jamaica which was seen as a softer target. Of course the army fell victim to the illness and attrition associated with the West Indies at this time.  On Jamaica the attackers were duped by the Spaniards during the capitulation negotiations which left them vulnerable and starving 5,000 miles from home. Death and disease descended on the force. Venables abandoned the remnants of his army and returned to England to face the music. A really interesting read which will leave you looking forward to Volume 2. 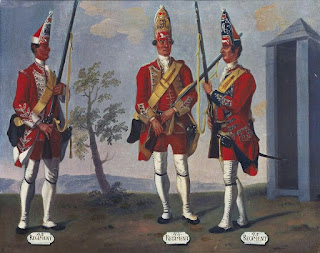 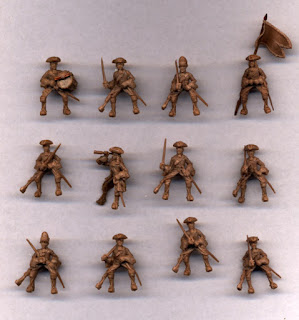 Artwork from Giorgio Albertini for Pierre-Louis Coudray's forthcoming title on the Irish Brigade. Depicted are soldiers of the regiments Fitzjames, Bulkeley, Clare, Dillon, Berwick, and Rooth during the era of the Seven Years War. The book is still a few months away from release, but you can register interest via the Helion and Company Publishing website: https://www.helion.co.uk/.../more-furies-than-men-the... 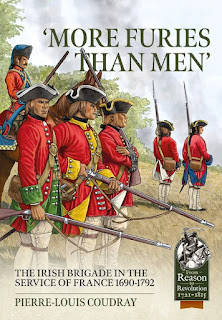