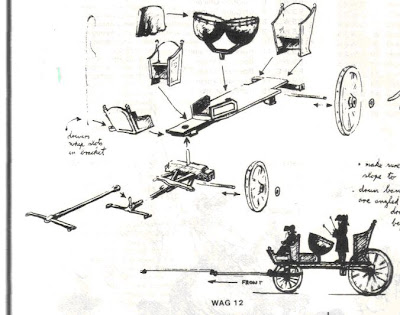 I need help from some of our more knowledgeable (or perhaps just older with good memories) readers. The illustration above is taken from a Miniature Figurines (MiniFigs) 25mm catalog published in the early 80's of their available early 18th century "wagons". This particular item was listed as "WAG 12 - Drum Carriage". The rear panel of the carriage was very ornately decorated with the Royal Arms as I recall. These were first introduced (I believe) in the 70's sometime. I believe that Tom Dye at GFI (MiniFigs USA distributor) even found the molds for it some time back when looking for a model of a General's Carriage, but I would have to confirm that with Tom. I know he found this "cut sheet" and the assembly instruction sheet.

I actually painted one of these as a contract job for a collector back in the late 70's or early 80's, and I recall that he provided me with a picture of a larger model of one from either John Garrett's book or Henry Harris' (I think) to use as a reference. I hadn't really thought of it in years, but we've discussed kettle drums quite a bit on here recently, and while browsing the Vinkhuijzen Collection on the NYPL site, I came upon this in the Williamite Dutch collection:

Just coincidence? I don't think so. The style and Royal Arms are too similar, even if the uniforms of the "crew" are different. I would like to find out if this drum coach or carriage existed (I'm assuming it did at some point) and any details on it that I can find. I've spent most of the evening doing Yahoo and Google searches and browsing my own collection of books without success. Which probably just means that I skipped right over it or stopped one page short somewhere!

Why my interest, other than nostalgia and idol curiosity? Well, I'm going to be painting some 15mm Williamite Dutch and English and I like to add some "color" models to my armies. I have General's coaches and carriages for my 15mm French, both the earlier 1640-1660 version and the later 1670-1690 version. I also have ornate General's tents from Baueda and assorted Staff figures, a map table, servants, a wench or two, etc. I think I have the wherewithal to scratchbuild one of these for my Williamite Dutch/English if I can find the sources to prove it's existence and use. So, if you can remember the book I originally saw it in, or even better, have an online source or a historical painting as a source, or even the actual written history of the drum carriage/coach, please pass it along. I could be very wrong, but I believe that when I painted it, the source I used attributed it to the Artillery, but I could be completely mistaken (an old mind is a terrible thing to lose).

Bill
Posted by Sir William the Aged at 22:01

Well, I think I can help you. The expert on the late 17th early 18th States' army, Dr O. van Nimwegen, wrote about the 'Pauckenwagen', meaning 'kettle drum cart' the following in Armentaria 32 (the magazine of the Dutch Army museum):

Finally, some attention must be given to the ‘Paukenwage’, that was introduced in the States’ Army by the Stadholder William III. The regiment artillery didn’t have a banner but had a beautiful decorated cart, with two large drums, played by a ‘herpauker’. This musician was clothed in a highly ornamented costume, paid for by the Raad van State. January 1747, mr Jan Walteling, ‘herpaukslager’ of the artillery asked the Raad to “make him the ordinary clothing, the earlier ‘herpaukslager’ had, consisting of a red jacket made of cloth, a camisool and pants with gold embroidery and blue velvet folden on the jacket, and the weapon of the Generaleit embroided on the back with slings and a scabbard, a red cloth over jacket and hat with gold edgings and plumes, deer leather gloves with gold ornaments, red stockings and a golden sword.


I am not quite sure what a camisool is, it’s also some kind of jacket, but probably clothing was a bit more complicated I had assumed earlier

I dont have the books myself, but there's more literature on paukenwagens:

Excellent start! Thank you Sir! I have also been doing some more searching, and apparently William either took the Dutch drum wagon itself, or copied it, when he assumed the throne of England. I found a reference in the "Essays on the Origins of Western Music" by David Whitwell describing the Royal Artillery Drum Wagon. I have also found references to the Drum Wagon of the Royal Artillery in the 1747 list of the British Royal Artillery Train on the Kronoskaf SYW Project site.

I have also found that apparently the Prussians were quite impressed with this as the Grand Elector, Friedrich Wilhelm I gave his field artillery a Paukenwagen with a crew of 16 black musicians in 1685. Friedrich II, der Große, doubled that number to two wagons and 32 crew in 1759.

So, we are definitely on the right track. Many thanks again.

I think every army of merit should have it's own Pauckenwagen!

Fire at Will said...

I like the Google translation of paukenwagen" from Dutch "Timpani car"

I know this a bit late, but I've only just come across this (rather splendid) blog). The Funcken's show what must be the mid-century Royal Artillery drum cart in Volume 2 of "The Lace Wars" (sorry, don't have the page number handy), whilst I'm certain that a Swedish version is shown in one of Pete Berry's (?) early GNW articles in "Wargames Illustrated" (again, I need to find the reference for that...)

Perhaps you found it yourself in the meantime: An 18th century painting showing the Royal Artillery kettledrums carriage. But, of course, this is definitely not Williamite but Georgian...