The Bavarian Army during the Thirty Years War, 1618-1648: The Backbone of the Catholic League (Century of the Soldier) 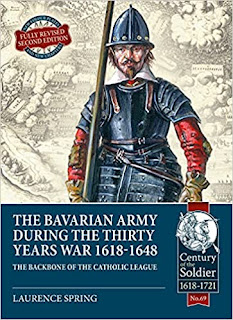 This is a really good book that goes into the Bavarian army in great detail. This is a second edition with added content. If you are planning a 30YW wargames army then this book is what you need. But it goes deeper than that by examining all aspects of Bavarian military life in the period. Rations, billeting, food, and tactics are all looked at and then compared to the other armies of the time. I found the chapter on clothing the army particularly interesting. Basically it was not a good life in the Bavarian army - pay often in arrears, often malnourished, it was no wonder that plundering was so widespread. The colour section is very useful. Flags and standards feature as well as some excellent illustrations by Sergey Shamenkov. There is, it being a book about the Thirty years war, a fair bit on relations between the military and civilians as well as a chapter on the Militia. There is a great chapter Life and death in the army which explains the various aspects of military life as well as the civilians that followed the drum. So all in all a great read that I recommend.