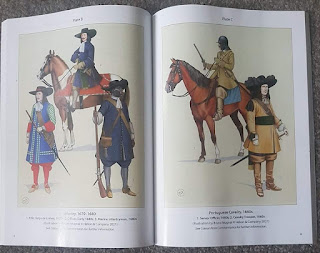 An exciting addition to a successful series. Covering the birth of the modern Portuguese army through its wars with Spain and their colonial actions during this period -  in Africa and Brazil - which is a first in the English language. There were English and French troops employed by the Portuguese in this era when their military was starting almost from scratch. From a Uniformology perspective this is a fascinating time. The transition to the adoption of the  French style of dress is covered in this volume. Mr Mugnai is not only a fine artist he also has a deep knowledge of costume history and as a result the illustrations are extremely useful. This is a book that I heartily recommend both from a historical aspect as this period is very obscure but also from a military uniform aspect as this is all new information and as such very welcome.

I hope it covers more the campaigns as the one, he wrote about the Spanish army. This was too much in details and sometimes boring to read in my eyes.