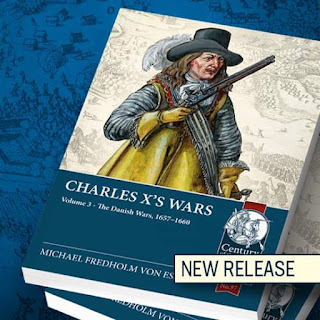 We are pleased to announce Charles X's Wars Volume 3 is now available!

The book describes and analyses the two devastating wars fought between Sweden and Denmark-Norway during the reign of King Charles X Gustav of Sweden, an experienced former general of the Thirty Years’ War.

The Dano-Swedish War of 1657–1658 was initiated by King Frederick III of Denmark-Norway, who saw an opportunity to recover the territories lost in 1645 and attacked Sweden while the Swedish King was fighting two simultaneous wars in the east – against the Polish-Lithuanian Commonwealth (‘The Swedish Deluge’) and Muscovite Russia. Based on his experiences in the Thirty Years’ War, Charles X led an invasion army to Denmark from Sweden’s possessions in Germany. After entering Jutland from the south, the Swedish army in a surprise winter campaign marched across the frozen Great Belt and Little Belt straits onto the Danish island of Zealand, threatening the Danish capital of Copenhagen. The rapid Swedish campaign took the Danes by surprise, and Denmark surrendered.

The Dano-Swedish War of 1658–1660 was a continuation of the previous war between Sweden and Denmark. This time, Charles thought that the time was ripe to subjugate Denmark under the Swedish Crown. However, Denmark received support from the Netherlands, the Holy Roman Emperor, Brandenburg-Prussia, and the Polish-Lithuanian Commonwealth. In early 1660, Charles fell ill and died, which paved the way for the Treaty of Copenhagen that restored peace between Denmark and Sweden and for the first time established a lasting border between the two countries.

Michael Fredholm von Essen presents new research on two wars rarely described in English. Additionally, the book explains the continued development of the Swedish Army and Navy after the Thirty Years’ War and details the military systems of Sweden and Denmark-Norway.

Save 20% on Against the Deluge: https://www.helion.co.uk/military-history-books/against-the-deluge-polish-and-lithuanian-armies-during-the-war-against-sweden-1655-1660.php

Save 20% on We Came, We Saw, God Conquered: https://www.helion.co.uk/military-history-books/we-came-we-saw-god-conquered-the-polish-lithuanian-commonwealths-military-effort-in-the-relief-of-vienna-1683.php

All above offers valid on print editions only until Tuesday 31st January. No code needed