Our Russian reenactor friends get to play on this beauty. To see more and hear the fifes and drums go to their Facebook page 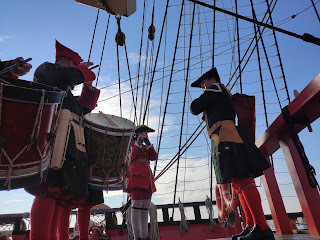 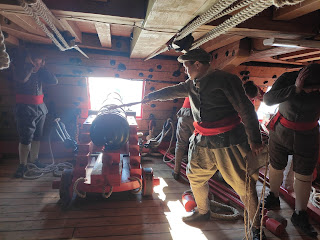 "Poltava" was a 54-gun ship of the line of the Russian Navy that was launched on 15th of June, 1712 from Saint Petersburg. The ship was named after an important for Russia victory over the Swedish Empire in the Battle of Poltava and became the first battleship laid down and built at the St. Petersburg Admiralty. In the 1710s, the ship was sometimes visited and commanded by Peter I, who also took active part in the design and construction of the ship. During her service of 1712–1732, Poltava was part of the Baltic Fleet, and before the end of Great Northern War participated in six marine campaigns (1713–1717 and 1721). Poltava was decommissioned in 1732. In June, 2013, the group of shipbuilding enthusiasts with support of "GazProm", a large Russian company founded in 1989, which carries on the business of extraction, production, transport, and sale of natural gas, began the construction of the exact copy of "Poltava" according to it's original project.