'Next Sunday marks the anniversary of the execution of Charles I on 30 January 1649. It is also the 50th instance that the soldiers of the King’s Army, the Royalist section of the English Civil War Society, have commemorated this event.

There will be musket, pike, artillery and mounted cavalry on the march, I understand ECWS are the only non-military organisation given permission to parade on Horse Guards Parade in central London.They will form up on the Mall, right in front of Buckingham Palace and St James Palace. The army form up between 10 & 11am, Sunday 30th January.The march makes its way in funeral order down the Mall and onto Horse Guards, following Charles’ last route. On Horse Guards, a religious drumhead service is held, a colour is trooped and blessed, the Oath of Loyalty is administered and awards and commissions are presented.The wreath is then trooped around the army before being taken by the honour guard through Horse Guards Arch and across to the Banqueting House and laid where the execution of Charles took place' 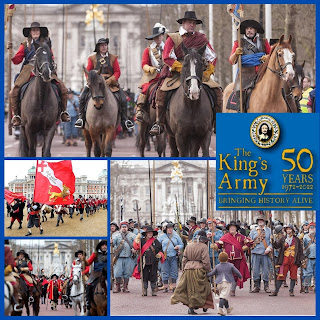