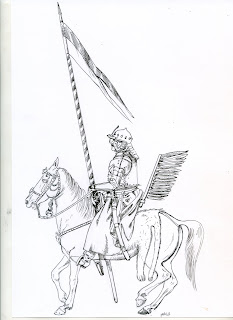 There were eight hostile powers involved in the Deluge. Sweden, the Commonwealth of Poland, Brandenburg-Prussia, Crimean Tatars, Ukrainian cossacks, Muscovy, Denmark and the Holy Roman Empire. They all had distinctly different military systems and armies and this is the great part about this book, First up is the forces of Sweden. Still maintaining the same system as during the 30 years war. Next up is the Commonwealth (Poland) and its famous military, encompassing eastern and western influences. Mainly a cavalry army with the celebrated Hussars. Next up is the army of Brandenburg-Prussia an army at its very beginnings and styled very much on the Swedish model. The next chapter os on the Muscovite military establishment with its horse archers and cavalry. The following chapter is on the Ukrainian cossack army. The next chapter is on the Transylvanian army and followed by a chapter on the Imperial army during the deluge. Final army examined is the Crimean khanate. All these chapters are well illustrated with colour plates by the talented Sergey Shamenkov. Flags are depicted and weaponry which is diverse in this war. Definitely a good idea to get this book. Would make a great wargames campaign.