Something for the weekend Peter Simmons

"When Danny Bowers reluctantly joins an English Civil War re-enactment society to impress the girl he has chased since childhood, he soon finds himself involved in the low-level intrigues of an irascible colonel locked in a personal feud with the Army of Parliament, a philandering Lord General, and the more sinister machinations of an unscrupulous historian with his own axe to grind." 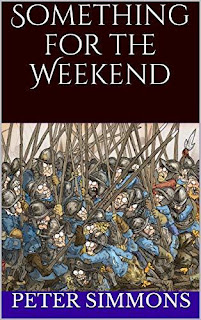 I downloaded the free Kindle sample - it looks pretty good. There is three books in the Harding's regiment of foot series. Also The Revenger's Tragedy and a Flash in the Pan. Amazon
Posted by Ralphus at 07:26